Mango, coconut and raspberry sorbets are always available, alongside vanilla ice cream. A handful of more seasonally inspired variations, as well as an alcohol-infused ice cream, complete the ever-changing menu.

With traditional flavors, Dwyer keeps it simple and spins sorbets for each service. For the more adventurous flavors, he likes to incorporate herbs and seasonings, to add depth and round out the flavor.

Members can choose between a half-order of three or a full order of six different ice creams and sorbets that Dwyer forms into quenelles and plates in a frozen deviled-egg tray. “We serve the dish with as many spoons as the table would like,” says Dwyer, who was recently named Pastry Chef of the Year by his local ACF chapter.

These cold, colorful quenelles are a hot ticket with HHYC’s 400 members. But the sweet treats aren’t the most impressive thing about HHYC’s pastry program. Rather, it’s how they help to further elevate an already impressive operation.

Dwyer came to HHYC in June of 2017, after serving as Pastry Chef of Palmira Golf and Country Club in Bonita Springs, Fla. When the opportunity to come to HHYC was presented, the pastry program was in its infancy. Dwyer saw the potential and jumped at the opportunity to make his mark. “The club has an amazing executive chef—Carlos Torres—who is incredibly talented and current on trends,” says Dwyer. “He believes in pastry. Plus, the club was about to embark on a kitchen remodel that included the build-out of a brand new pastry shop.”

That shop was completed earlier this year and is outfitted with the highest-quality equipment, including a top-of-the line combi oven, a marble table, a cook-and-hold oven that creates a humid, rain forest-like environment that is great for custards, and the kind of ice cream maker pastry chefs dream of.

“The membership here really appreciates and craves high-end pastry,” says Dwyer, who is driven by one main goal: to create unique pastry experiences for members.

“We change menus monthly so we can showcase the seasons,” he adds. “But we’re also very conscious of catering to our members’ desires.”

For example, Dwyer has seen members gravitate toward organic ingredients and products. In response, he now offers at least one organic dessert on every pastry menu.

“The success of our program relies on satisfying and surprising our members,” he says. “We will continue to engage all the senses, offer lots of variety, and find ways to offer personalized touches that really elevate the experience.” 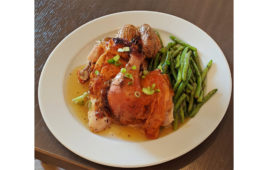