From the golf course to the pool to the back office, Vermont National Country Club uses technology to the fullest to enhance members’ experiences.
By Joe Barks, Editor

Club management has always been a balancing act, and making the most of technology is no different than offering the right mix of facilities, amenities and member services—it requires careful and constant assessment of what will work best for a particular club environment. Through that approach, Vermont National Country Club (VNCC), in South Burlington, Vt., has positioned itself as a leading-edge example for using technology effectively in today’s club world—and has ridden the technological wave to display impressive growth during one of the toughest periods clubs have ever faced.

VNCC, founded in 1997 and built on 400 acres of a former dairy farm nestled between the Green and Adirondack mountains, has never skimped on facilities or services for its membership. The club features a Jack Nicklaus Signature Design championship course that is the first of its kind in New England, along with a stately $4.1 million, 13,500-sq. ft. clubhouse (see photo below), Har-Tru tennis courts, a Junior Olympic swimming pool complex, and many other amenities.

Christopher Barron, one of the first employees hired when the club opened in the late ‘90s, left in 2002 to embark on a career path that took him to properties throughout the country, including Rancho La Quinta CC in La Quinta, Calif. When Barron returned in 2009 to be VNCC’s General Manager, the club had begun to use available technology to create operating efficiencies and enhance members’ enjoyment of all that was offered. Starting with implementation of a point-of-sale system from Jonas Club Management in 2005, VNCC gradually implemented additional features and capabilities, including a website developed through Jonas’ ClubHouse Online module.

As the club’s new GM, Barron was all for continuing to explore how technology could help VNCC advance toward its goals and distinguish itself in the club market. “We’re always looking to stay ahead of the technology curve,” he states.

Under Barron’s direction, the next steps saw VNCC go to electronic billing statements and enhance the club’s website to provide an online calendar and other features—and these also paid quick dividends to improve the productivity and effectiveness of the VNCC staff. “It’s not about severing the personal touch,” Barron notes. “It’s about streamlining the things that are taxing. When any chit detail from the last 13 months can be found online, accounting isn’t getting called about every $29 charge, and my controller is freed up for true financial and human resource duties. Every minute saved gives us all more time to focus on member service.”

Tapping In to Tee Times A new mobile version of VNCC’s website has greatly enhanced the club’s ability to communicate with members about all aspects of operations.

Technology’s real potential for saving time while enhancing personal touches was shown at VNCC this past spring, after the club rolled out new automated enhancements for an active golf program, which sees 26,000 rounds in a season that normally runs from mid-April through October. A new mobile version of the members-only side of the club’s website (www. vermontnational.com) was integrated with existing technology, to seamlessly combine an electronic tee sheet with other administrative and communications features. The integration now starts at the bag drop, where starters have iPads providing details on the day’s players, and continues through the golf shop and to members’ computers and smartphones. 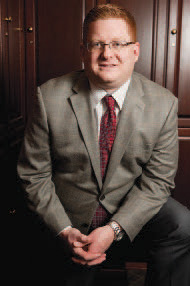 “[Technology] isn’t about severing the personal touch; it’s about eliminating the things that are taxing and striking the right balance with your facility and staff.”
—Christopher Barron,
General Manager,
Vermont National Country Club

“It’s been a huge success all around,” says Barron. “Members can now get automatic, online updates and notifications within a one-and-a-half-hour window, to know what tee times are available. In the golf shop, because the phone just doesn’t ring anymore, our pros are freed up to interact with members and promote lessons and other specials—and we’ve definitely seen golf sales improve. And when players show up for their rounds, the starters address them by name, know if they’re going to ride or walk, and can provide added service.”

The new system has also helped improve communication about course maintenance, Barron adds. “We can use the online tee sheet to block times for things like spraying, and in the case of something like a frost delay, we can send an e-mail just to the members whose tee times will be affected, instead of bombarding the entire membership,” he says.

“There’s just so much more efficiency,” Barron adds about the new mobile component. “And I really do believe the day isn’t too far down the line when almost everything will be done by phone only, as the way that on-the-go, younger members want to hear from and interact with their club. For food and beverage, nightly dinner specials are tweeted (@VermontNational), and VNCC’s banquet manager uses Facebook to help make contact with potential customers (the club has for-profit status). “Social media is a great asset; there’s really no cost, and the exposure you get is priceless,” Barron says. “In a small community like ours, we think it definitely helps give us a niche. We’ve always had a nice facility and great staff, and we think we’re now using technology to strike the right balance and make our club known as a welcoming place.”

Vache Hagopian, Jonas’ Director of Business Development, sees VNCC as the Starbucks of the club world. “Like Starbucks with its plush chairs and free wi-fi, [VNCC] has used technology to make it clear what it’s all about and why someone would want to join and use it,” Hagopian says. “Technology can be intimidating at times, but [VNCC] has embraced it and let it work its magic.” 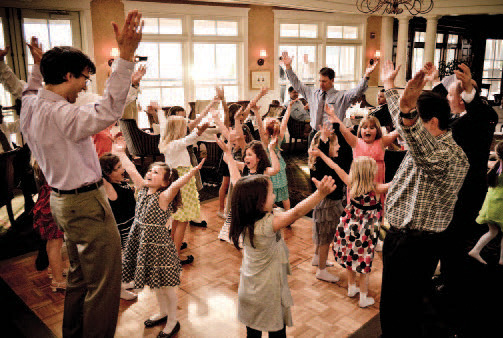 Photos of father-daughter dances and other events are posted through Flickr on the VNCC website, as “the best way to show how people have fun and what club life’s all about,” says GM Chris Barron.

Adds Trevor Coughlan, Jonas’ Director of Marketing: “[VNCC] doesn’t just use technology to attract the next generation, but to add levels of service for existing members, too. It truly is tech-friendly and has built that into the club’s profile.” Establishing that profile has led many members, old and new, to keep beating a path to VNCC’s door. When he returned as GM in 2009, Barron reports, the club had 218 golf members, and it now has 305. “We’re now pushing up against having a waiting list and actually thinking of a membership cap,” he says. “A few years ago, that was a pipedream.

“The club is growing and it’s rewarding to see the fruits of our labors,” he adds. “The mobile site was a huge home run, and we’re eager to keep working with Jonas to add other new things on our wish list, to try to stay out in the lead.” How Clubs Can Avoid Falling Into the Service-Charge Trap How Clubs Can Market Memberships in a Pandemic—and Beyond How Golf Clubs Are Making the Pro Shop Pandemic-Proof