With a menu of inspriring seasonal fare, dozens of foodcentric events and mixologists on hand, The Yale Club of New York City has many ways to satisfy members’ interests and appetites.

From its start in Manhattan’s Madison Square to its current location on Vanderbilt Avenue, The Yale Club of New York City’s modern energy and welcoming atmosphere have been a windfall to many alumi, but none more so than foodies.

“Being a city club, the main focus of our operation revolves around dining and activities,” says Executive Chef Charles Kehrli, CEC, a graduate of the Culinary Institute of America who has been designing gourmet banquet and a la carte menus at The Yale Club for sixteen years. “Any chance we get, we try to link activities with a relevant, memorable dining experience.”

On the club’s calendar of events, food and drink are frequently cast as the raisons d’être. The staff that weaves this image, led by Kehrli and Kevin O’Brien, Director of Food & Beverage, finds unique ways to provide education about wine, liquor and specialty food items—not only to generate interest in the trends the club introduces in its dining rooms, but also to provide knowledge that can help members navigate New York’s sophisticated dining scene.

Inside there are 138 guestrooms, three restaurants, a rooftop terrace, modern athletic equipment, and banquet and catering facilities that can accommodate up to 250 guests.

It wasn’t always such an impressive picture, though.

In 1993, The Yale Club’s management and governance recognized that reinvestment in the club was needed to keep it a viable entity that would provide value to the membership, which had been dwindling for years.

“We needed to revitalize the club on several fronts, including our food and beverage operations and the physical infrastructure, in order to continue to provide a home away from home for our members and fulfill our mission to provide a place to bring alumni together,” says General Manager Alan K. Dutton.

Enter Kehrli and O’Brien, each of whom had previously spent the bulk of their careers in various catering, lodging and hospitality environments in the New York culinary scene.

“I was impressed with the physical building and structure of The Yale Club and was surprised to see that the space was so underutilized,” says O’Brien.

The two culinary heavyweights began to work closely to develop a long-term, sustainable plan to reenergize The Yale Club’s food and beverage operation.

“The changes began with a $10 million loan that the club took out against the building,” says Kehrli. “With some of those funds, we renovated key front- and back-of-the-house spaces, to make the dining areas more appealing to members and to update the kitchen areas with functional equipment.”

After these updates and extended efforts to acquaint members with these and other improvements, the volume of business increased dramatically. “We now average about 60 weddings each year and see between 30 and 40 corporate events each week,” says Kehrli.

That’s a significant improvement, considering The Yale Club used to host hardly any corporate events, and only between five and eight weddings each year.

“The patronage of our three dining rooms, as well as member satisfaction, has increased substantially,” says O’Brien. “Now, the food and beverage department brings in about $11 million in revenue, and we are able to reinvest some of these funds in activities and special events for our members to enjoy.”

Seasonal and Sustainable
If you ask Kehrli to define The Yale Club’s style of food, he will humbly say it has been through several transformations, and will continue to evolve with its members and the industry.

“With each menu and season we introduce new ideas, techniques, and presentations,” says Kehrli. “The goal is to be competitive with the New York restaurant and catering scene by offering quality and value.”

The Yale Club is focused on delivering seasonality, local and sustainable menus, and offering a wide variety of styles and services in its three restaurants and outdoor terrace (The Grill Room, the Tap Room, and the Roof Dining Room and Terrace). There are tasting menus, prix fixe menus, casual and formal dining menus, and a new focus on shared plates and adult bistro food presentations and service.

“We also have successful Wine of the Month and Visiting Chef programs that give our culinary team the opportunity to work with chefs and vintners from around the world and preview some of the presentations being used in other locations throughout the city and the nation,” says Kehrli. “It is at events like these that we have an opportunity to introduce new techniques and have fun with creative presentations, which eventually trickle into our other a la carte venues.”

With sustainability now top of mind with many of its members, the club recently recognized the need to “green” the organization. Through its efforts with the Yale Sustainable Food Project, Yale’s RUDD Center and the Yale School of Forestry, The Yale Club has partnered with Yale University to make this desire a reality.

“We have twice hosted an event, ‘Chefs for a Cause,’ which featured 20 celebrity chefs from New York restaurants, each demonstrating a tasting plate featuring a dish made with sustainable or local ingredients,” says Kehrli. “The event raised funds for the Yale Sustainable Food Project.

“We also have had students from The Yale School of Forestry take on The Yale Club as part of their curriculum, to develop short- and long-term action plans for sustainability at the club,” he adds. “And we’ve partnered with a non-profit organization called Seeds in the Middle, recognizing the need to reach out to schools in the community and expose young students to healthy eating alternatives and lifestyles.”

Through that partnership, The Yale Club hosted a field trip for 20 students from PS 91 in Brooklyn that featured a hands-on cooking class for the students, teachers, and parents. The event also included a tour of the club’s facilities, as well as discussions on nutrition, flavor, and healthy eating habits.

Food Fundamentals
In each of the club’s dining areas, the staff has tried to create a distinct atmosphere through the choice of furniture, décor, and menu offerings.

The menu selections for the Tap Room and Grill Room are similar in many ways. “In these outlets we try to cross-utilize mis en place, to ensure turnover of product and efficiencies in preparation,” says Kehrli. “The price points are very similar.”

Meanwhile, the menus for the Roof Dining Room have distinctively different price points and presentations, to be more reflective of the trendy, upscale New York restaurant scene. For this venue, reservations are recommended.

The Roof Dining Room Terrace, which the club branded as “44th and Terrace,” is the newest addition. An outdoor lounge area is reminiscent of Manhattan’s trendy rooftop bars.

“With this new offering, we’ve tried to target our younger members and those who want to experience the Roof,  but don’t necessarily want a full three-course meal,” says Kehrli. “The terrace menu focuses on lower price points, shared plates and bar snack choices that can be enjoyed with cocktails.”

Mixologists On Hand
The Yale Club also provides an array of beverage options for members to enjoy.

“We feature cask ale and partner with Brooklyn Lager, which we feature as our Yale Lager,” says O’Brien. “We have a relationship with Chelsea Brewing Company that provides us with a few specialty beers, like their IPA and Blonde Ale. Our main bar is stocked with approximately 60 different single-malt scotches and staffed with five mixologists who can prepare traditional mixed drinks as well as the specialty cocktails featured on our drink menu.”

Thirsty members can sip on anything from a Sour Appletini or a Lime Cosmopolitan to Negroni or a French Gimlet. The club also offers a fairly extensive dessert port and cognac menu for after-dinner drinks.

“Our activities incorporate an array of tasting events where members have the opportunity to sample liquors from Patrón or Johnnie Walker, or to experience an event in our Mixology Series, which features an array of different mixed drinks using a variety of liquors,” says O’Brien. “We’ve had everything from absinthe to rum to gin featured within this series, and it continues to be very popular.”

The Yale Club’s wine program is also well developed. Each month the club brings in a different winery and highlights four or five of its wines as a part of the “Wine of the Month” program.

“The wines are featured in all of our dining rooms and are typically the biggest sellers on our menu,” says O’Brien. “We also host a wine dinner with either the winemaker or the owner of the winery, and usually have 50 to 70 members attend.”

Needless to say, the Yale Club has been—and will continue to be—busy.

“The increased business has afforded us the opportunity to add new services for our members, improve training and staffing levels, and focus on the quality we provide,” adds Kehrli. 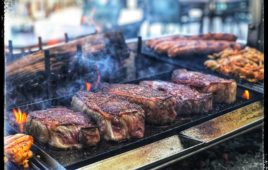