After a sister’s boyfriend first got him interested in being a superintendent, and his dentist’s brother’s wife helped him land his first internship, Tim Nielsen developed his own passion that now helps Creekmoor GC satisfy golfers’ affection for the game. It’s been said that being a golf course superintendent is a labor of love. For Tim Nielsen, it became a labor because of love. The eight-year superintendent at Creekmoor Golf Club, in the Kansas City, Mo., suburb of Raymore, Mo., has a background not unlike many other superintendents. He played golf in his youth, worked on a course during high school, and earned a turf degree in college. It’s only when you fill in the blanks that the story gets more interesting.

“I joke with my friends that I am the son of a superintendent,” Nielsen says. “Actually, my father was the superintendent of schools [in Colby, Kan.]. In the summer, he and the PE teacher would take me and my friend with them to play at a nine-hole golf course. It would be early in the morning—even before the staff got there, maybe 5:30 or 6 o’clock. I remember our socks being soggy because there was so much dew on the ground. That’s how I learned the game.”

“During the summers in high school I worked at the [local] country club because my best friend’s dad was the superintendent,” he continues. “It wasn’t because I was going to be a superintendent when I got older. I had never even considered greenkeeping as a profession.”

When college came calling, Nielsen pursued a civil-engineering degree. But after a few years, he had a change of heart. And that is where love and luck came into play.

“My sister was living in Florida, and just happened to sit next to a superintendent on a flight. He was actually from around here (the Kansas City suburb of Overland Park, Kan.),” Nielsen says.

“Well, they end up dating. He would talk about being a superintendent and that got me interested. I wound up transferring to the University of Nebraska-Lincoln, earned a turfgrass degree and after getting a lot of help along the way, here I am, a golf course superintendent.”

An example of that help came from another love-based connection, to Landscapes Unlimited, the Lincoln-based golf course management company. The brother of Nielsen’s dentist’s wife is the President of the company, and during the middle of the golf course construction boom, Nielsen was offered an internship. He had the opportunity to go almost anywhere: East Coast, West Coast or the Caribbean.

“I chose Independence, Missouri,” Nielsen says with a laugh.

But alas, there is no fairy-tale ending. As Nielsen chuckles, “No, my sister did not marry the superintendent. But that would have made the story a little more interesting.” But there is interest in the affection that Nielsen has developed for the profession his sister’s former boyfriend led him into, and for his current role at Creekmoor, as he described in his conversation with C&RB:

Nielsen: We really have a wide variety of people and playing abilities. We’re a semi-private club open to public play, but we don’t get a great deal of people from outside the community.

The members get advanced tee-sheet privileges. The retirees seem to fill up the weekday mornings, and the evenings are for families—we have a great couples league, too. The men tend to play more on the weekends.

It is a housing community course on a great piece of land. I always used to call it a prairie course, but building is booming, so you have houses starting to wind around most of the holes.

A lot of groups like to play here. We do about 30 outside corporate events and host a lot of high-level tournaments. We do AJGA tournaments, USGA qualifiers, Kansas City Golf Association competitions, Web.com Tour qualifiers and a few others. We get about two of these a year. I enjoy hosting them because the people we work with are true professionals, and it tests you a bit to provide good conditions throughout the summer heat. C&RB: What makes the course a challenge, yet enjoyable?

Nielsen: People like to play this course. We get feedback that it is a very enjoyable experience. No two holes are alike, so there is great variety—and I like to think the fact that it is well-conditioned adds to [the enjoyment], too.

The five sets of tees make it playable for every level. The greens are large and not too undulating. It has the highest slope rating of any public-access course in the Kansas City area, at 147, so it can be challenging. The rough is thick and the biggest challenge for the golfer—about a half a stroke a hole. So you have to keep it in the fairway. We also have 65 bunkers—more acres of bunkers than putting greens—and water on almost every hole. So, you need to avoid those areas.

Our most unusual hole is our par 5, No. 13. The green has two shelves with a huge dip in the middle. Being a par 5, you really need to play your approach shot very well or simply lay up to the side of the green. It’s well-bunkered in front and back, so going for the green in two is a risky proposition but can be quite rewarding.

C&RB: What amenities does the club offer other than golf?

Nielsen: We are full-service. In addition to golf, we have a clubhouse, two swimming pools, tennis, basketball courts, a playground and a 110-acre lake. The lake sees a lot of fishing, some pontoons and smaller boats. If you are a resident, you get free access to everything but golf. But you do get a break on golf rates.

The residents of the community approved an assessment a couple of years ago that allowed for an expansion and remodeling of our clubhouse. We now have a fantastic open-air pavilion that overlooks the 9th and 18th holes. We can now host just about any event, including large tournaments and weddings. It really is quite a view and a great centerpiece of the community.

C&RB: The golf course opened in 2007, just when the downturn in the industry began. Why has it continued to do so well?

Nielsen: You have to credit Cooper Communities, the owner, for investing in the golf course. It is an amenity that attracts homeowners. Even when it got tough financially, we still had home-building going on.

And it has really boomed in the last couple of years. New phases are currently being developed and houses are rising from the ground every day, it seems. The growth gives us a bit of a built-in clientele.

C&RB: What is your reporting structure?

Nielsen: I report directly to the General Manager for things related to the golf course. I have a great relationship with our General Manager, Rick Scott, and our Head Golf Professional, Nate Sargent. Working with those two and their staffs make it a good situation for me and my staff.

Last year, my team took over maintenance for the common areas of the community. Areas like the medians, areas next to roadways and clubhouse grounds are now under my umbrella of responsibilities, where before we contracted it all to a local lawn care company. It is more work than you would think. I have a third assistant and two full-time staff dedicated to that alone. 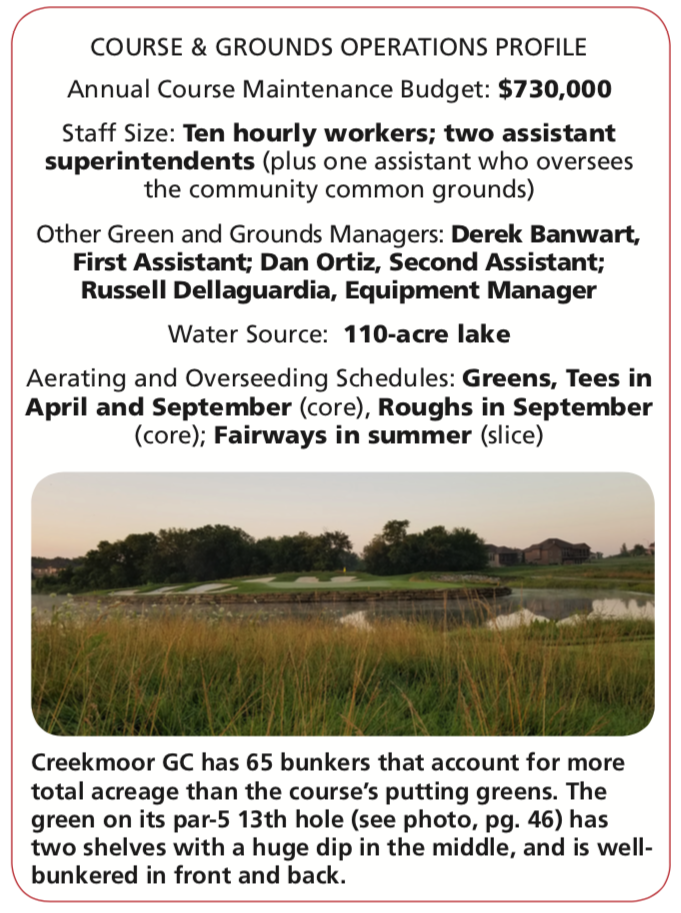 C&RB: What are your biggest course-management challenges?

Nielsen: Maintenance of the course tends to be pretty straightforward until Mother Nature takes her toll. As with most courses, bunkers always provide quite the management challenge, especially after big rain events. We have so many of them [65] and have to work them pretty hard.

Another issue we constantly deal with is the wear and tear of golf-cart traffic. We see a lot of turf decline where people enter and leave the golf hole and along the edges of fairways next to fairway bunkers. Of course, this is no different than any other golf course that allows golf carts on the turf.

The course is only 11 years old, so we still have the benefit of being a relatively new course. But, if I were to do anything, I would install Better Billy Bunkers. That would help with drainage, provide more consistency with the sand, and not keep me up at night when thunderstorms are approaching. When our bunkers get washed out, it puts a huge strain on our operation and the staff.

C&RB: How has golf course management changed since you entered the profession?

Nielsen: I think how technology has helped in water management has been huge. How I manage the greens has changed tremendously. I can’t imagine watering without our TDR 300 moisture meters that measure the volumetric water content of the soil.

It used to be that we would subjectively apply water to the greens when hand-watering. I know superintendents who still prefer to water based on feel, and that’s fine if that is what they deem is best. But I would rather base my watering decisions on facts. We’ve learned that syringing the entire green is wasteful and unproductive. We water what needs water and leave what doesn’t alone.

People laugh at me, but if a green only has a few spots that need water I would rather walk around with my TDR in one hand and a simple garden-variety watering can in the other. It saves time and energy by not having to pull a hose out of my cart and up to every green. If the sensor shows a dry spot, I’ll pour a little water on it. It has not only saved us a tremendous amount of time, but we are saving water and the electricity to pump the water. We have far more consistent greens on a daily basis as well.

C&RB: How have you changed as a superintendent over the years?

Nielsen: I don’t let things bother me as much anymore. I think that is part of the maturation process.

I remember attending a graduation party on the top level of one of Kansas City’s skyscrapers and seeing a thunderstorm approaching from a long distance. I dropped my wife off at home around midnight and headed to the course to mow the fairways before the storm got there. If I would have continued like that, I probably wouldn’t be a superintendent today.

I’ve also learned to trust my assistants more. I used to think I had to do everything and be in control of everything. I’ve focused on hiring the right people and I let them do their job. I am so fortunate. I have a great staff, and they deserve much of the credit for course conditions.