At the end of a satisfying meal, it takes a tempting dessert menu to entice members and guests to order that final course.
By Kate Parham, Contributing Editor

Even during times when diners are especially focused on watching both their wallets and their waistlines, dessert is one luxury that many remain reluctant to reduce. A recent consumer study found that 70% of Americans eat dessert at least once a week, and that more diners have consistently eaten more dessert over the past three years.

When it comes to creating successful dessert menus at clubs and resorts, it’s all about giving members and guests what they want. “Most members are fairly set in their ways,” says Heather L. Hurlbert, Executive Pastry Chef at Cherokee Town and Country Club, Atlanta, Ga. (and a first-season contestant on Bravo’s Top Chef Just Desserts).

So Hurlbert tries to introduce new items in subtle ways. “I’ll try to do something a little safer that won’t scare members off,” she says. “I wouldn’t serve a saffron rice pudding, but maybe I’ll do a cucumber sorbet as an intermezzo.” Jeffrey Guy, Pastry Chef at Houston (Texas) Country Club, seconds that notion. “I think members want desserts they would make at home—nothing too crazy or exotic,” he says. 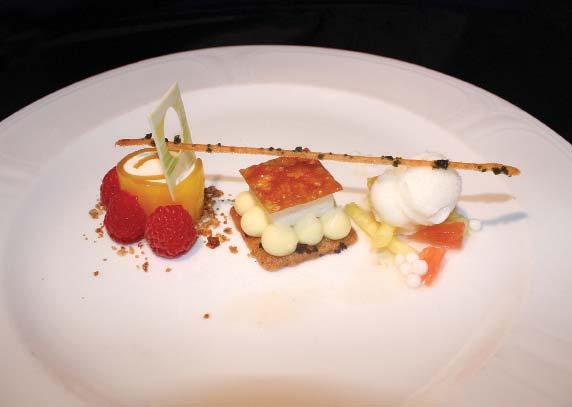 Houston CC’s dessert menu, which runs a 36% food cost, features down- home desserts with upscale twists, such as buttermilk pie with caramelized pecans, and crème brûlée with berries and a passion fruit tuile. When Guy feels like experimenting, he’ll test out new dessert ideas during Sunday brunches. Then he’ll incorporate the more successful dishes into the regular menu.

But as at Cherokee Town and Country Club, members of Houston CC tend to be fairly predictable when it comes to dessert. Guy says there are several items he simply cannot remove from the menu: a pecan ball with hot fudge, key lime pie, lemonade pie, carrot cake, and blueberry cobbler with bourbon ice cream.

Like other menus, the theme of a dessert menu should match the style of the dining room. “Fun” desserts go well in casual settings, while more elaborate desserts fit with more formal dining rooms.

With two club locations and five dining rooms, Cherokee Town and Country Club has a lot of moving parts—and menus. “In our fine dining room, we can push a bit more in terms of flavors, techniques and plating,” says Hurlbert. “But in our casual restaurant, we serve more approachable desserts, like pies, crisps and bread pudding. In the casual environment, members don’t want anything fancy or plated with a ton of garnish.”

On Cherokee’s banquet menu, Hurlbert serves seasonal desserts like holiday breads with spiced or apple butter, and white chocolate cheesecake with gingersnap crust and cranberry coulis. With an overall food cost of 44%, and total a la carte sales averaging around $2.5 million, Hurlbert keeps dessert costs at around 36%. One way she keeps costs in line is by offering a rotating “dessert of the week” special, to help use up any waste.

At Orchard Creek Golf Club in Altamont, N.Y., the dessert menu is made up of seasonal items, typically revolving around apples found on the 500 acres of farmland surrounding the club. “We utilize the produce from the farm as much as possible,” says Kevin Efaw, Food & Beverage Manager.

During the summer months and strawberry season, Orchard Creek GC offers desserts like strawberry parfaits. To cut back on food costs—which run about 28%—Efaw prefers to use single-serve items, rather than large cakes and pies, which the club doesn’t go through as quickly. Orchard Creek GC has also found success swapping a traditional wedding cake for apple crisp, which is now selected by about 60% of the couples who get married at the club.

This past summer, Efaw started a new program called Sweet Endings, offered as an optional add-on to banquets. “We serve cider donuts and warm chocolate-chip cookies with coffee and cider in to-go cups, so guests leave with that in their hands,” he says. “Nearly every wedding we’ve offered it to has participated.”

Diners’ natural inclination to turn dessert down, for fear of overeating, is real—but also beatable. One successful solution can be the ever-popular mini-desserts. At Cherokee, Hurlbert offers dessert shooters for $2 a pop, in a variety of flavors, like chocolate and fruit. Technomic’s newest study finds that for the past three years, more consumers have consistently eaten more dessert. In fact, a whopping 70% of Americans eat dessert at least once a week.

“It’s a little dessert that’s cheaper and smaller, but still lets guests get their sweet craving,” says Hurlbert. Splitting desserts is also very popular among diners, so Hurlbert takes the guesswork out of the process by offering halved portions. “To accommodate those who like to split, we offer a mini-almond praline basket—one of our most popular full-size desserts—at half the price.”

Making desserts inclusive is another way to get diners interested in them. Every Wednesday, Cherokee offers a three-course menu, with wine, for $32. “If I introduce a dessert in an inclusive meal like that, members get to taste the quality of our pastry and, in most cases, dessert becomes a regular part of their meals with us,” Hurlbert says. She also strives to accommodate food allergies and special diets by always offering sugar-free, nut-free and gluten-free options. “That’s often the one thing that keeps a member from ordering dessert,” she notes.

No Pastry Chef? No Problem!
IF YOU CAN’T AFFORD to staff a full-time pastry chef, all is not lost. Try these three easy tips:

Outsource. “There are many companies selling excellent par-baked and frozen desserts, as well as garnishes and drizzles,” says Jeffrey Guy, Pastry Chef at Houston (Texas) Country Club. Try buying chocolate cups that can be filled with a simple chocolate mousse or berries. “We buy a really high-quality, premade pavlova, which is a dried meringue, that can be filled with ice cream or berries for a unique presentation,” says Guy.

Servers are on the front lines when it comes to persuading members and guests to purchase dessert. “The more educated the servers are, the better,” says Hurlbert, who has all the club’s servers taste and see every dessert Cherokee offers.

“Servers are more excited to sell something if they know what it tastes like, how it’s made, and if it’s worth talking about,” she adds.

Houston CC’s Guy agrees: “We have tastings for the waitstaff and give them detailed descriptions of how the desserts are made, so they are better able to describe the dishes to our members.”

It’s not just about the message, though—it’s also about the delivery. Orchard Creek’s Efaw has found that more elaborate and tempting descriptions can be incredibly successful in helping to boost dessert sales. “When we ask if a member wants strawberry shortcake, there’s no impact,” says Efaw. “But when the server says, ‘We have strawberry shortcake made with fresh strawberries picked from the farm this afternoon,’ members are sold.”

Presentation is also an important selling technique. “If we have something that has visual impact, like a parfait in a fluted glass, we’ll bring it out to the table,” says Efaw, who also recommends having a signature dessert on your menu. “Our apple crisp [see photo, above] is somewhat irresistible,” he adds. “It’s been a pillar of the community for the last 35 years. All we have to say is ‘Save room for the apple crisp, we just took out of the oven,’ and it’s sold.”

Today’s diners will shy away from overly rich or heavy portions, however. “We don’t serve a chocolate cake that stands six inches high on the plate; our portions really are single-person,” says Efaw.