Sound administration of a property that offers a uniquely diverse appeal continues to earn enthusiastic approval from the members of this North Carolina community.

Chapel Hill, N.C., takes its name from a small Anglican church that was built in 1752 on a 480-foot point in central North Carolina, as a place that could provide locals and travelers with a place “of ease.” Forty years later, the town that is now most well-known as the home of the University of North Carolina (UNC), and as one leg of the Research Triangle, was founded.

The site of the original church is now part of downtown Chapel Hill, adjacent to UNC’s main campus, and is occupied by The Carolina Inn, which was built in 1924 as an impressive, Mount Vernon-style structure that is now listed on the National Register of Historic Places. But while the original “chapel hill” has retained its historic significance and is still worth seeing for its architecture, it’s really not all that noteworthy for its actual geography.

A few minutes from downtown, though, there is a surprisingly striking physical vista. While it actually only involves another 200 feet of elevation, Edwards Mountain literally sticks out as a unique prominence, ranking as one of the highest points between Winston-Salem, N.C. (75 miles to the west) and North Carolina’s Atlantic Ocean coastline (more than two hours east).

In the late 1980s, when real-estate developers sought a location for a high-end gated community with golf and club amenities that could appeal to the burgeoning affluence brought to Chapel Hill by the university and Research Triangle, it was easy for Edwards Mountain to catch their eye. Sixteen hundred acres, many heavily forested, were acquired that surrounded the mountain and ran up to its summit.

And plans were unveiled for creating over 1,200 homesites, ranging in size from a half-acre to more than three acres, for a community that would be called the Governors Club (the name was selected to attach a sense of historic significance and dignity to the project, and then later reinforced by naming the community’s streets after those who had held the state’s highest elected office).

When it came time to start to plan the club component of the development, historic significance and recognizable prominence was also the theme. Jack Nicklaus Design was enlisted to carve Signature courses out of the unique topography, through what at the time was a very progressive approach: nine-hole layouts, each with unique character and features. The first two nine-hole courses—the Lakes, at the lower end of the property and with a more typical North Carolina “Sandhills” feel, and the Foothills, featuring elevation changes as it runs up Edwards Ridge—opened in 1990. Four years later, a third course, “The Mountain,” literally completed the journey, taking players up to a 27th hole offering a spectacular view that prompts first-timers to wonder if they haven’t suddenly been transported to the western part of the state.

As part of recognizing the Governors Club’s 20th anniversary in 2010, Jack Nicklaus, after noting that he is always hesitant to make comments about courses he designs that could indicate they might be a “favorite,” went on to cite several reasons why what he and his company created in Chapel Hill did have special qualities. 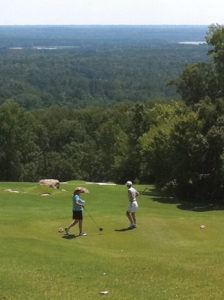 “I would have to say it would be in the top 10 of natural inland properties on which I have worked,” Nicklaus added. “It had great trees, wonderful roll to it, and the layout of the course just fit in there so naturally and comfortably. I think if you looked back, we did not move a lot of dirt to build, [and] that is the sign of a great golf course. The course just fit, and nothing was forced.

“I have always thought Governors Club never truly got the recognition it deserved,” Nicklaus concluded. Four years after Nicklaus made that comment, Patrick Seither, as he was preparing to leave as the club’s Director of Golf to embark on a new pro-shop software venture (he is being succeeded by Thomas Brinson), reported that it had continued to be somewhat puzzling during his tenure why the many unique aspects of the Governors Club golf courses hadn’t created more of a general-public buzz, or climbed higher on course-ranking radars.

“But that’s starting to build,” Seither added. “And from a member-play standpoint, recognition of all that we have here has never been an issue; rounds [currently at 34,000 a year] have always held steady.”

Never Growing Old
The recent buzz-buildup that Seither cites stems largely from reaction to the results of a comprehensive, $600,000 course renovation that the Governors Club completed in the past year. The project rebuilt bunkers and also added the Governors Club to the list of transition-zone clubs that have converted greens to ultradwarf bermudagrass. Kevin Redfern, the club’s Director of Grounds & Golf Course Superintendent, reports that the conversion stands to be a big plus not only from an operational standpoint (he now plans to aerify just one time a year, versus three previously), but even more importantly, in terms of positive member response.

“We worked closely with Jack Nicklaus Design to make sure we wouldn’t lose any of the original architectural integrity with the renovation,” Redfern reports. “And now that the members have their golf course back, you can really sense the happiness—in fact, this is the happiest I’ve seen them in my ten years here.”

Even though Redfern has been at the Governors Club for a decade, as an original native of central Illinois he still marvels at all that the property presents, both to him as a workplace and for members and guests to enjoy.

“You just don’t expect to find topography like this and with a true four seasons in this part of North Carolina,” he says. “For someone coming from Illinois, where the biggest hill is an overpass, it’s amazing to see all that’s here and all that you can do. It can actually get a little overwhelming if you don’t constantly pay attention to detail. But certainly, being bored is not an option.”

Perpetual Care
That’s also proved to be the case for the other facilities at the Governors Club and all the programming and activities they encompass. The club’s 42,000-sq. ft. clubhouse opened in 1995, followed by a 12,000-sq. ft. Wellness & Recreation Center that was completed in 1997, the same year Governors Club members acquired the club and its facilities from the developer. (The club component is a separate, for-profit entity from the community’s Property Owners Association; about 70% of the homeowners are club members, reports Sara O’Leary, the club’s VP, Director of Membership & Marketing.) 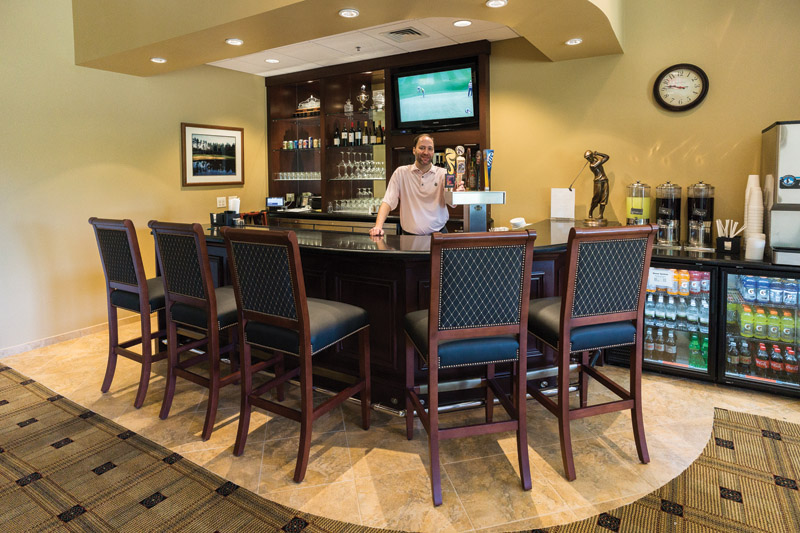 A new round of interior renovations included an upgrade of the men’s locker room bar.

Member dues fund all maintenance and improvements for the club and its holdings, as well as club staff salaries. In addition to the golf courses, clubhouse and Wellness Center, those holdings include six Har-Tru tennis courts, two hard tennis courts, indoor and outdoor pools, and a playground. The club also owns all but one of the lakes within the community. “We have more water here than we know what to do with,” says Redfern.

Since taking ownership, the membership has stepped up to fund a series of improvements to the clubhouse, notably through a $3.1 million project called “A Better Way” in 2008, and then with another $1.6 million last year that renovated substantial areas of the clubhouse, including locker rooms, the ballroom, the foyer and much of the upstairs.

The latest round of clubhouse upgrades focused on cosmetic details designed to enhance the Governors Club’s appeal both for regular member use and outside events, while also making room for new services and amenities, reports Jay Johnson, Clubhouse Manager. Johnson came to the club two years ago from Carolina CC at around the same time that a new General Manager/COO, Doug Shifflett, CCM, arrived from River Hills CC in Lake Wylie, S.C., to succeed Haissem Baityeh after his move to Bent Tree CC in Dallas. “We’ve added taps in our men’s locker room bar and our casual Club Room that have increased draft beer sales 40%,” Johnson reports. “We also put in a new cappuccino machine that’s been a big hit. Overall we’ve seen our chit averages go up several dollars because of success with small plates, dessert sales and specialty drinks.”

Johnson, a sommelier, has also helped to stimulate more growth in what was already a very active wine program and Wine Society at the club; his biggest challenge, in fact, is arranging enough events to accommodate a Society membership that has grown to 180 and has a wait list of another 100. “Every wine dinner we do, for 80 people, sells out within three hours,” he reports.

Johnson also works closely with Executive Chef Ben Guaman and Lisa Johnson, the club’s Director of Sales, Catering & Special Events, to maximize how the clubhouse improvements can pay off on the event side. While the club seeks to host 20 or more weddings a year, it adheres to a policy of never having more than one a day, which Lisa Johnson says helps to provide a competitive edge with hotels in the area.

Another advantage comes from Chef Guaman’s knack for incorporating family recipes and other customized touches in event menus—especially if the customer is interested in seafood, which dominates a la carte sales at the club. (For Chef Guaman’s recipe for pan-seared day-boat diver scallops, see link below).

All of this activity continues to help position the Governors Club as anything but a retirement community, which is another perception the management staff has worked hard to dispel. “We’ve had many families with kids join in recent years, and our average age has dropped by three years,” says O’Leary. “Once we can get people on site, it’s easy for them to see just how active we are, and just how much of a sense of a community there is for people of all ages.”