Club chefs are coming out of the kitchen to be the star of the party with eye-catching action stations that not only feed, but also entertain. Members of Bonnie Briar CC had the opportunity to create their own ramen bowl featuring an array of different options and ingredients. There were two pots of broth—one was vegetarian and the other was a traditional Tonkatsu broth made from beef bones and pork shanks. Housemade noodles could be topped with slowly braised pork belly, soft-boiled eggs, braised beef short ribs, bamboo shoots, bean sprouts, bok choy leaves, scallions, radishes, enoki mushrooms, hot sauce and a homemade sesame-black garlic oil. The Chef working the station would ladle the broth into a small pot and build each ramen bowl to order.

Osteria-Style Assorted Pizza by the Meter

By The Polo Club of Boca Raton (Fla.)

During this “Night in Venice” themed event, there were a number of action stations, including a meter-long, stone-fired pizza station at which pizza was hand-cut to order by a chef with pizza scissors to the size member wanted.

Clambake Station Along With a Beer-Can Chicken Station

By The Metropolitan Club of the City of Washington (D.C.)

Because The Metropolitan Club of the City of Washington (D.C.) rarely serves its members buffet style, when they do, Executive Chef Vincent Horville and his team go all out. Horville will enlist the help of the club’s engineers and wait staff to create displays that feature unique details, complex setups and delicious displays of food.

“By pushing the limits of what’s possible, you learn more about what you’re capable of than by playing it safe,” says Horville. “Take a chance.”

The Metropolitan Club’s beer-can chicken station was actually inspired by a presentation at the 2018 Chef to Chef Conference. At the station, Executive Sous Chef Brandon Gross and his team broke down chickens for the members as needed. Meanwhile, just beside that station, a clambake station (above, left) featured freshly steamed topnecks, steamers, cherry stone clams, mussels, shrimp, sausage, potatoes, corn on the cob and lobster rolls. There were also “birds” flying above the station and a clam shack behind it, cleverly named after Horville.

By The Metropolitan Club of the City of Washington (D.C.)

During its luau party this summer, The Metropolitan Club of the City of Washington (D.C.) served up whole roasted pigs, carved to order (bottom, left). The station was such a hit that members were ‘hanging out’ by the pigs, reports Horville.

“Don‘t look at everything as a for-profit item,” he adds. “That might limit your idea. It’s okay to go above and beyond to please the membership. You can find a way to balance your costs. At the same time, not all ideas are good or executable, so learn from your mistakes.” 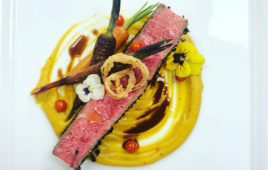 How to Design a Banquet Kitchen