Offering a high-tech golf facility can convince beginners to take the plunge—and allow seasoned players to fine-tune their games.

Opened in 1991, the Sea Island Golf Performance Center at Sea Island (Ga.) Resort was the first training facility in the United States to be recognized by the United States Golf Association (USGA). It had a major upgrade in 2000, and then last spring underwent a transformation—emerging in May with a golf fitness facility, new hitting bays, 3-D imaging and video analysis, and an indoor hitting area. The project was done in partnership with Nike, Polo and Peter Millar.

“The initial footprint didn’t change, but we added five outdoor bays and enclosed one as a putting studio, so there’s an additional 1,500 square feet or so,” notes Brannen Veal, Director of Golf for the resort. “Our focus is on all golfers, but because we have three of the Top 50 instructors and a lot of PGA tour guys who live here, our training facility caters to beginners as well as seasoned players. We have programs in place for everyone in between.”

Not surprisingly, Sea Island’s training facility is brimming with activity, with seven full-time teachers, three apprentice professionals and two full-time club fitters, plus the staff of its new fitness center.

“We have marketed Sea Island as a place where the pros live and train, but also as a fantastic spot to come and learn, regardless of your skill level,” Veal says. “Our message is: Don’t be intimidated; play golf and train better.”

Four hundred miles north at Wakefield Plantation, a McConnell Golf property in Raleigh, N.C., a new Learning Center is letting just-starting and seasoned golfers alike enjoy the game, regardless of the weather. The Center opened in September 2013, and professional golfers including Carl Pettersson, Cameron Percy, David Mathis and Albin Choi used it all winter to prepare for the 2014 PGA and Web.com seasons. 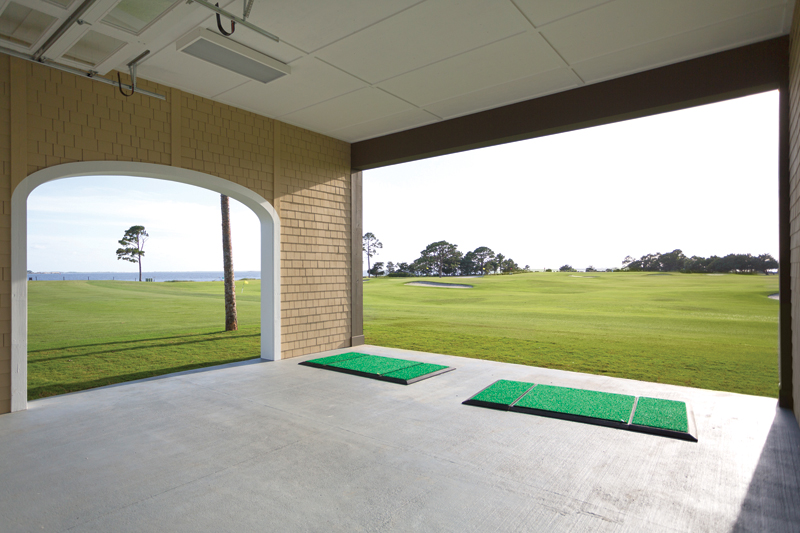 Sea Island Resort has continually upgraded its Golf Performance Center since it first opened in 1991, most recently with new hitting bays, an indoor hitting area, 3-D imaging and video analysis and a golf fitness facility.

Another benefit of the new facility, reports Director of Golf Josh Points, was encountered in the spring: “Our club-fitting process became much more seamless,” he says. “We were able to permanently house all of our demo equipment and use our FlightScope to place our members in the best product for their games.”

When McConnell Golf purchased Wakefield Plantation in 2011, the range had undefined targets and an inadequate short-game facility, Points notes.

“We renovated the range in 2012, greatly expanding the short game area and adding lots of target greens to the range,” he says. “One of the best features is our wedge green, which allows players to hit wedges from 40 to 110 yards.”

And because Wakefield has a wide range of abilities within its membership, the center is geared to all levels of players, he adds.

“Between the video technology and the launch-monitor technology, we have been able to tailor each lesson to help any student improve,” Points notes. “There are not too many hours of the day that do not include a lesson of some type, so the facility is generally open to our membership during normal business hours. Plus, the [1,600-sq. ft.] facility allows enough room to conduct kids’ clinics, which we utilize in the colder months for our junior golfers.”

While upgraded training facilities are primarily an asset for the golf side of a resort or club, they can have an impact on other departments, too.

“There’s no question that [Wakefield Plantation’s] facility has had a positive impact on our revenue in all areas of the club,” says Points. “Our hard-good sales and lessons have both increased by 20 percent in our first full year, and I anticipate a bigger jump in year two, as our membership grows accustomed to using the facility.” The fitness facility at Sea Island Resort’s Golf Performance Center was designed to focus not only on pain management and prevention, but enhance wellness beyond playing golf.

Since its opening in 1991 to its renewal in 2000 and its latest renovation, the Sea Island Golf Performance Center at Sea Island (Ga.) Resort has long been an innovator in what such a facility should feature. The latest upgrade continued its trend-setting tradition with a special addition: a fitness center just for golfers.

“When we first started this, we wanted a place where you can come to do anything golf,” recalls Brannen Veal, Sea Island’s Director of Golf. “We wanted not only the best accommodations and incredible golf, but [to make it so full-service that] you don’t have to go anywhere else. The new fitness center is the final piece of it. Anytime of year, you can come to Sea Island and get all this.”

“All this” now includes what has been added to make The Center the only golf facility, according to Veal, that features dual-fitness assessment capabilities, including NG360 (Nike Golf Performance) and TPI (Titleist). The long list of professional golfers who have already taken advantage of Sea Island’s fitness offerings includes Matt Kuchar, Davis Love, Brandt Snedeker, Dustin Johnson, Lucas Glover, Zach Johnson, Natalie Gulbis and Morgan Pressel.

Because golfers often experience back pain, arthritis and other ailments that can interrupt enjoyment of the game, Veal explains, Sea Island saw value in bringing a fitness center on-site, so there could be a focus not only on pain management and prevention, but on better living overall.

The Royal Melbourne Country Club in Long Grove, Ill.,  opened its long-game practice area and renovated short-game area in August. The goal behind all of the improvements has been to make the practice area more representative of current course conditions while providing a “best in class” facility, says Brad McMillan, Assistant General Manager/Director of Golf.

“As part of [our Golf Academy,] all of the latest and greatest technological innovations are available, from Trackman to T Bar,” he says. “Royal Melbourne and KemperSports decided to build the short-game area to show a further commitment to our membership. We wanted to enhance their experience and add another amenity to help separate Royal Melbourne Country Club.”

And McMillan is another who can already point to evidence of how the project has increased business across the board. “The membership will tend to spend more time at the club, either coming out after work or staying after a round to work on their games. This has led to increases in both food and beverage sales,” he explains. “Additionally, having the proper tools and the new facility have allowed our golf shop to do a much more thorough job of fitting our members, which has led to increased golf shop sales—particularly wedges.”

Much of the same is expected for The John and Diane Watson Short Game Training Facility, which just opened on November 9 at the El Macero (Calif.) Country Club. General Manager David Knox, PGA, says he hopes the new facility will help members come to view the Troon-managed club as an extension of home.

“They can spend an afternoon at our practice facility, go and get food from our restaurant or snack bar, enjoy friends and take a lesson with a pro,” Knox says. “Over time, we expect it to grow the number of golfers at our facilities, which in turn increases the orders for golf clubs and [custom fittings] for equipment.”

The El Macero facility features two large putting greens, two deep bunkers, a wedge range with numerous targets at multiple distances, and both rye and bermudagrass to help players chip from varying surfaces. In addition, at the back of its driving range where the University of California-Davis college team had been practicing, the club added 12 concrete discs—25 to 100 yards—for pitch shots.

The impetus behind the facility was to help the UC-Davis golf program attract prospective students. But Knox notes that it is also designed for helping everyone from professionals to casual players to kids.

“The sky’s the limit from a marketing and retention standpoint,” he adds. “Similar to ‘The Big Break’ reality show on the Golf Channel, we can now do those types of challenges and contests, and even incorporate our junior program. It provides a way for our instructors to teach not just the scratch and single-digit players, but get the kids excited. We can start from the hole backward, then explore the whole game.”

While the Watson facility at El Macero officially opened last month, Knox notes that a springtime event will be held to give it a more formal debut. And he expects to add to his instructional staff as the facility gains exposure.

“We have group sessions and clinics that are demonstrative, then offer our private instruction, whether it be greenside bunker play or chipping,” he says. “We are now talking about adding some technology. As a facility that values game improvement, investing in equipment such as a launch monitor will enable our pros to help students meet their improvement goals.”