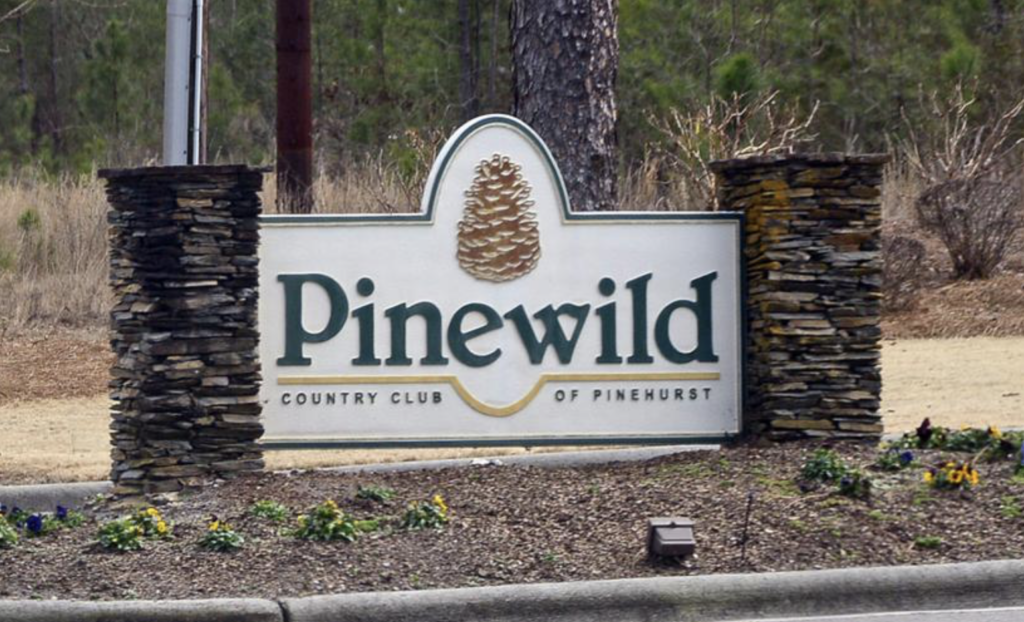 The 2,040-acre gated community in Pinehurst, N.C., which is owned by Pinewild Project Limited Partnership, with Koichi Sato as principal, has 61 employees and generated $4.84 million in sales last year. There are 500 acres slated to be developed in Phases IV and V.

Pinewild Country Club of Pinehurst (N.C.), a 2,040-acre gated community, appears to be under contract with a listing price of $22 million, The Pilot reported. The offering summary, detailed on the Leisure Investment Properties Group’ website, describes Pinewild for its “exceptional quality…the vast natural beauty…the exclusive opportunity” and says the development is “seasoned and not a distressed asset” and includes 500 acres of future developable land (“with preliminary plans for 1020 additional lots” noting that preliminary buyers must “sign and return Pinewild NDA to review future development plans and possibilities”); nine remaining ready-to-build single family lots, two golf courses, a clubhouse with a banquet room and separate restaurant, and a swim and tennis complex.

Chris Karamitsos, partner and senior managing director of Leisure Investment Properties Group, did not reveal much, indicating that the “contractual confidentiality is very, very tight” as is “the negotiation of the final terms,” The Pilot reported. He did note that over the past few months multiple offers from multiple parties had been received.

“When the dust settles, given the negotiations, we feel the future of Pinewild is very positive,” he said.

Homeowners in Pinewild have known of the development’s availability for months, saying Pinehurst Resort was an interested buyer at one point, The Pilot reported. Were the resort to buy Pinewild, it would be a reunion of sorts from a prior relationship more than 30 years ago.

The current owner is Pinewild Project Limited Partnership, with Koichi Sato as principal, The Pilot reported. The partnership has 61 employees and generated $4.84 million in sales last year.

Chris Little, General Manager of Pinewild, insisted “there is no contract in place” for Pinewild’s sale, but did acknowledge the property is listed for sale, The Pilot reported. He said Sato now spends most of his time in Japan. The listing of the property notes that “the owner currently does very little marketing for real estate.”

Karamitsos told The Pilot that the land is currently valued at $16.7 million, and the golf courses are valued at $5.25 million. He believes the fact that “Pinewild is the only community outside of the Pinehurst Resort allowed to have Pinehurst in its name” will enhance the acquisition.

Home values within Pinewild range from $325,000 to $1.7 million, The Pilot reported. The 500 acres remaining are slated to be developed in Phases IV and V.

Pinewild and Pinehurst have had a tangled history of litigation and animosity that goes back almost 40 years and almost landed the groups before the state Supreme Court, The Pilot reported.

1984: Dallas-based ClubCorp, founded by Robert H. Dedman Sr, buys the Pinehurst Resort and Country Club from a consortium of banks. The Tufts family had sold the business for $9 million in 1970 to Diamondhead Corp.

1985: Pinewild, a fledgling community located west of the main village, requests voluntary annexation. The Village Council rejects the request, saying it does not want to bear the expense to bring water, sewer, and roads to the developing community.

1987: ClubCorp buys an interest in Pinewild.

1990: ClubCorp forms a partnership that includes a Japanese cookie maker, Tohato Inc., to buy Pinewild. At the time, eager to be a part of the U.S. real-estate market, Tohato saw Pinewild as a bargain. As part of the process, Koichi Sato enters the picture as negotiator for the deal. He becomes General Manager of Pinewild.

1991: Under a separate marketing agreement, Pinewild advertises its then-only golf course, the Magnolia, as Pinehurst No. 8. As part of the agreement, ClubCorp, with seven golf courses at Pinehurst, receives 10,000 free golf rounds annually on the Magnolia, giving most of them to guests at its hotel.

August 1996: Tohato and ClubCorp are ordered by a judge to separate their offices at the lodge at Pinewild. Both sides agree to share the sole toilet.

August-September 1997: ClubCorp sues Tohato, saying the dispute between the two companies has placed Pinewild in danger of bankruptcy.

March 1998: ClubCorp pulls its managers out of Pinewild. Federal officials arrive to probe Tohato’s allegations that ClubCorp intentionally mismanaged Pinewild so it could later buy the property at a lower price. ClubCorp denies the allegations. ClubCorp agrees to leave Pinewild six days later.

Early 2005: The New York Times publishes a front-page article, “In County Made Rich from Golf, Some Enclaves are Left Behind,” highlighting “the inequities of unincorporated communities in Moore County.” Suddenly, Moore County has a mammoth public relations battle centered around its policies of hand-picking what areas are annexed and what areas are not.

Late 2005: A grassroots committee is formed in Pinewild to fight the annexation.

2006: ClubCorp sells its portfolio of 170 clubs for $1.8 billion, including debt, to the KSL Capital private equity group, keeping only Pinehurst.

2008: Pinewild sues to block annexation, saying the village is seeking to enrich its budget.

2008: North Carolina’s annexation law favors municipalities. The case is dismissed without prejudice, allowing Pinewild to file a new claim. In this new suit, Pinewild is the first private, gated community in the United States to challenge a forced annexation.

2010: The state Supreme Court rejects the case, noting “Pinehurst complied with state annexation laws and was proper in all respects.” Pinewild dismisses all remaining appeals and it officially becomes a part of Pinehurst.

Lydia Boesch, a Pinewild resident who helped lead the fight against annexation, is now one of three Pinewild residents who serves on the Village Council, The Pilot reported. She said she is “happy for Mr. Sato and hopes that the newest owner gives our long-term employees the same generosity and support.”

Still active in the Pinewild community, most recently as President of the Board of Directors for the Property Owners Association and a member of the Village’s Neighborhood Advisory Committee, she told The Pilot, “All of the people at Pinewild are what makes this place great.

“I’ve seen enough of the good here to outweigh anything else,” she said. “We all learned from our annexation fight. We accepted it, we were able to change some statutes that now ease the annexation process and make it right, we made friends, and that is what it is all about. But I still can’t wait to hear who bought it.”