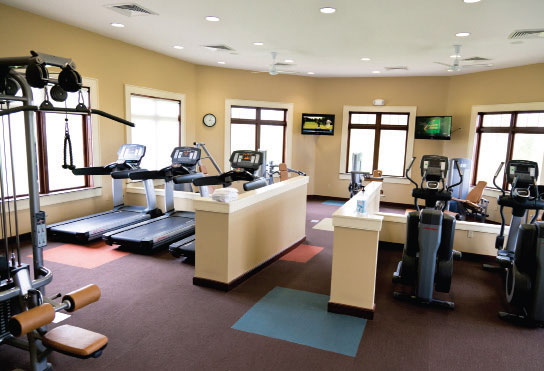 Adding a swimming pool and fitness center to its championship golf
course is paying dividends for The Club at Old Hawthorne.

When Billy Sapp saw the tranquil areas neighboring his Columbia, Mo. home being turned into strip malls and housing projects, he knew it was time to do something with the land on which he lived.

Out of that, The Club at Old Hawthorne emerged.

“I felt development of this area was imminent and my wife and I didn’t want to see this property turned into just another subdivision,” says Sapp, who runs a Missouri-based construction company. “We thought we’d do something for the community, and university, at the same time.”

The nearby University of Missouri benefited by way of the 18-hole championship golf course, designed by St. Louis-based Arthur Schaupeter, which serves as the anchor to the new private residential community, and club, that the Sapps created.

Opened in 2007, Old Hawthorne was quickly received as one of the state’s best new courses. But Sapp wanted more for his members. For those who didn’t golf, he thought a pool and fitness center would provide added reason to spend time at the club.

If You Build It…
Before determining what the non-golf additions to his club would entail, Sapp and his management team toured similar facilities in Texas, Oklahoma and South Carolina, looking for ideas.

“We visited some other courses and three or four clubs that were involved with university-related projects,” says Sapp. “Then we got the architects involved.”

Travis McCubbin, PGA, General Manager and Head Professional at Old Hawthorne, knew a pool and fitness center would fit in nicely with the club’s overall growth plan. “Having opened in 2007, we were expanding our amenities to our growing membership,” says McCubbin. “Like most clubs, we knew a swimming pool was a necessity, but we thought we could differentiate our club greatly with a first-class fitness facility.”

While other clubs in the area offered swimming pools, Travis McCubbin, PGA, General Manager and Head Professional, knew a fitness center would separate Old Hawthorne from its competitors.

The $2 million price tag for adding the pool and fitness center is expected to be recouped within 10 years. Meanwhile, The Club at Old Hawthorne added an athletic membership—for pool and fitness, plus clubhouse access—to its list of options.

With an overall budget of $2 million, the four-lane, 77×75-foot pool and 4,800-sq. ft. fitness facility opened in 2009. McCubbin estimates the club will see a return on investment in approximately 10 years. Annual maintenance for the pool, where there is no lifeguard on duty, is $11,000; staffing and maintaining the fit-ness center costs $48,000. After figuring in revenue generated, the club is looking at net yearly expense of $26,000.

While other clubs in the area offer a pool, Old Hawthorne stands alone with its fitness center. According to McCubbin, this has helped to grow business.

In addition to our championship golf course and clubhouse, the fitness facility has helped to attract many types of members,” he says. “We have many large commercial fitness facilities in Columbia for people to choose from, but our smaller size and more personal service level, along with the other amenities they receive, make our club an easy choice.

Also, being a part of a growing housing community encourages a lot of our residents to become members here, instead of driving 10 to 15 minutes into town to work out,” McCubbin adds.

There’s also a certified Titleist Performance Institute trainer on staff to help with golf-specific programs and an on-site massage therapist.

Mora sees the fitness center additions as a win-win: The club has seen a boost in membership, and current members have more options that add value to their overall membership package.

“It is such an added bonus for our members and their families,” she says. “It is nice for the women and children, especially if the women do not like to play golf. They can use the fitness center and participate in the classes and personal training options, and they can take their kids to the pool, too.” The fitness facility’s size, along with other
amenities the club offers to members, make it
more attractive than other area gyms

Bringing in the College Kids

In addition to local and regional memberships, which include all the amenities the club has to offer—golf, fitness, pool, clubhouse and social—and a national membership program, Old Hawthorne now offers athletic memberships, too. A one-time initiation fee (none for property owners) and monthly dues provide access to the fitness center, pool, clubhouse and a full schedule of social events.

As a result, Old Hawthorne has been attracting a much-coveted demographic to its membership ranks: young adults, who are often drawn to clubs with multiple activities options. McCubbin points to the affordable dues structure and proximity to three colleges/universities in Columbia, which provide a younger, more vibrant pool of prospects. But there’s more.

“Lifestyle living,” notes McCubbin. “As the most recent private golf course development in central Missouri in more than 35 years, families are drawn to Old Hawthorne to build their first homes and lead active lifestyles.
“Other private clubs in the Columbia area have much more mature membership bases,” he adds. “We have been able to attract a different, younger membership demographic.”

Adding members, both young and old, is critical to success, but the new and varied activities options at Old Hawthorne are going a long way toward retaining existing members, too.

“First and foremost, we want to provide as many reasons to our current members to come and utilize the club as often as possible,” says McCubbin. “Whether it is socializing, dining, golf, swimming, working out, conducting business meetings or any other reason, we try daily to provide a reason for them to come out and see us.

“We have created incentives for current members who help us recruit new members,” he adds. “In addition, we have conveyed that in order for this club to succeed, we must have an active and growing membership. We can achieve that goal by enlisting our members to work with the club’s staff to take ownership of the future of their club.”

Will the addition of the pool and fitness center sell more lots in the housing component? They certainly accentuate the offerings.

“It allows us to sell the lifestyle of Old Hawthorne,” says McCubbin. “Live, play, work. Obviously we have the living part down. With our golf course and pool facilities, we provide plenty of options to play. The working part takes place in our fitness center.”

All told, The Club at Old Hawthorne ownership and staff are convinced that adding pool and fitness facilities help to promote a healthier environment, which in turn leads to healthy, happy members who will not only live longer, but also belong to the club longer. THE CLUB AT OLD HAWTHORNE and the University of Missouri have an agreement to host three events a year over the next 20 years: a pair of three-day intercollegiate golf tournaments (one each for the men’s and women’s teams) and a one-day fundraising event.

While many universities own and operate the courses on which their teams compete, most call public courses “home.” It is not totally uncommon for universities to partner with private clubs, however. The University Club in Baton Rouge, La., hosts Louisiana State University, The Territory Golf Club in Duncan, Okla., is home to Cameron University, and the University of South Carolina plays at Cobblestone Park Golf Club in Blythewood, S.C., to name a few.

At Old Hawthorne, the relationship is more than mutually beneficial. “Old Hawthorne is a well-designed course that is always in great shape. We just hosted a Division I event there, and the course was immaculate,” says Mark Leroux, men’s golf coach at the University of Missouri. “Our partnership with Old Hawthorne has helped our team get better.”

From the club’s perspective, a great deal of recognition can be gained. People like Old Hawthorne owner Billy Sapp, a lifelong Mizzou fan, will go to great lengths to be a part of the university for which they root—including belonging to the club that hosts its tournaments. Taking a Swing at Launch Monitors