In addition to capturing much of the history of
Huntingdon Valley CC, the Brewer Room that now houses many of its archives has become one of the club’s most in-demand function rooms.

A variety of factors have prompted clubs to get serious about capturing and presenting their pasts in a way that can also promote the value of membership for generations to come. Here are some do’s and don’ts for creating permanent archives that will properly put the “story” in history.

After decades when “archiving” at many clubs meant tossing new items onto already-large piles on the floors and in the closets of general managers’ offices, or stuffing things into boxes marked “save” that were then put where no one could ever find them, the industry is finally waking up to the power and potential of a serious and steady approach to capturing, preserving and properly presenting the wealth of historical material that it collectively possesses.

As a result, many presentations have been made recently to GMs and their Boards at private clubs across the country, built around messages like “Make your history work for you” and “If you do not start collecting yesterday today, there will be no tomorrow.” The presenters have been experts with Ph.Ds in museum curatorship, or history buffs who’ve helped clubs where they are members create acclaimed archive collections.

Sometimes, these presentations have been prompted by the approach of a milestone anniversary for a club, or because major clubhouse renovation projects have led to the discovery of artifacts and/or suggestions by architects and interior designers that historical photos, trophies and other memorabilia would be the perfect way to bring distinction to new dining venues, and remodeled entrances and hallways, where members—and prospective members—are most likely to see and enjoy them.

Whatever the impetus may be for a club to decide to begin exploring a more formal and ongoing approach to archiving, however, it’s critical to understand as that exploration begins just how much of a commitment will be required—especially in cases that call for making up for a lot of lost time. 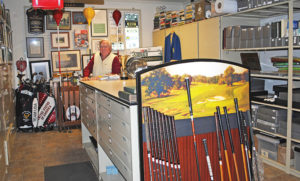 “I haven’t yet found a club that can’t benefit [from an archives program], because history is so interactive,” says Andy Mutch, President/CEO of Golf Curator, Inc., the firm he started after leaving his position as a museum director with the United States Golf Association (USGA) and earning a doctorate in Museum and Gallery Studies from the University of St. Andrews in Scotland. The list of clubs Mutch has helped with archival initiatives reads like a Who’s Who of America’s most storied golf venues, including such revered names as Merion, Baltusrol, Olympic and Oakland Hills.

But committing to an archives program, Mutch stresses, involves much more than just building a trophy case. “Everyone starts with ‘We want a display,’” he says. “But archiving is about all of the work that must be done prior to having an exhibit.”

In fact, Mutch adds, it’s only after taking the first four steps that he uses to describe the scope of work he does for clients—Organize, Document, Preserve and Design—that the fifth and final step—Display—can start to be executed.

“[Archiving] can’t be done overnight,” he says. “It’s about finding all that exists to help show and tell the chapters of a club’s history. Some clubs—even those that might not think they have a rich history—can have thousands of artifacts that could help tell their full story, and it can take a year of planning before you can start to phase in displays.”

Paying Dividends for Years to Come
Even if there might be that long of a development period, however, examples abound of how the payoffs from a proper commitment to an archives program can be plentiful, and perpetual. Perhaps the strongest of these comes from Merion Golf Club in Ardmore, Pa., where a dedicated, climate-controlled archives room in a central area of the clubhouse now serves as the hub for an ever-changing array of club and golf history treasures that can be viewed throughout the property, and also as a valuable, permanent resource for members, staff, historians, and the public at large. John Capers, whose family spans several generations of Merion membership, has served as the primary coordinator of the club’s archives program since it was first initiated several years ago. Merion’s program has become so well-known within industry circles, in fact, that Capers now frequently makes presentations to clubs around the country that want to know more about what it takes to do archives right.

While his presentations are full of valuable practical tips for how to find, obtain, catalogue and preserve relevant items, the most compelling takeaways come from Capers’ full list of the potential benefits that can be gained through a comprehensive approach to creating and maintaining club archives on a fully committed level. In addition to engendering and sustaining member pride, which he says is “obviously near the top,” that list includes:
• architectural evolution reports (for both buildings and grounds) for long-range restoration and master plans;
• design and decorating ideas for club functions;
• inspiration and support for new events such as period parties, as well as an annual archives party that can re-prime the pump with new contributions from members and guests;
• new member recruitment and orientation;
• staff training and reinforcement of the club’s traditions, culture, ethos and historical perspectives;
• legal defenses for historical preservation efforts, tax and property exemptions, etc.;
• a single-source access point for the history of club operations (valuable, Capers points out, for all of the inevitable times that Boards and GMs need data about the history of dues increases, assessments or other information to convey to members to help advance agendas or initiatives); and
• reinforcement of the club’s important role and contributions to its region and community. The “History Hall” at Exmoor Country Club exemplifies the types of displays that can be created as impressive final steps of comprehensive approaches to capturing, preserving and presenting a club’s archival material. But displays or books shouldn’t be seen as the starting points, experts stress. “Archiving is all about the work that must be done prior to having an exhibit,” says one.

Even at clubs that don’t have the rich golfing history and experience of hosting multiple major championships like Merion, fully embracing history through a well-researched and thought-out effort can yield unexpected and lasting benefits. Mutch points to another tradition-rich club in the Philadelphia area, Huntingdon Valley (Pa.) Country Club, which captured archives and memorabilia collected by and related to two popular long-time members, leading to the creation of special rooms where they are now displayed.

“They’re the two most noteworthy rooms in the clubhouse and everyone now wants to have their functions in them,” Mutch reports. “They were both very well-received and they’ve paid for themselves [and the cost of the preparing and displaying the archives in them] 10 times over.”

That kind of enthusiastic response from a membership for a club’s successful execution of an archives program, on any level, isn’t surprising to David Normoyle, another former USGA historian who now runs Normoyle Historical Consulting out of Saratoga Springs, N.Y.

“You shouldn’t feel that just because you haven’t hosted a U.S. Open, you don’t have a story to tell,” Normoyle says. “It’s all about the experience you’ve been able to provide for your membership over the years, and the identity you’ve had. And identity is the one thing you can’t buy, or replace, if it’s lost.

“One thing about the information age is that everyone has become smarter consumers,” he adds. “Golf and country clubs are in the same sphere as restaurants and churches and other places, in that they’re all in the business of selling experiences and cultural products that compete for people’s time and money outside of work and home.

“The strongest clubs,” says Normoyle, “are the ones that can attract people through their clear identities—and the ones that struggle are the ones that don’t have a clear sense of who they are. That’s why your history matters, because your identity is all about your culture, and the stories you have to tell.”