Greenhorn Creek Resort, in the heart of Sierra Nevada Gold Country in Angels Camp, Calif., has what most clubs would call a non-traditional relationship with its food and beverage venue, CAMPS Restaurant.

About three years ago, Sherri Smith, previously the Operations Manager for the resort, had an idea that would shift the burden of its complex food and beverage operation away from Greenhorn and into the hands of a single proprietor, to allow the resort’s different departments to run more smoothly.

Smith proposed that she be given the opportunity to lease CAMPS Restaurant from the resort to run food and beverage functions for the club, and offer a public eatery for the community.

“[Greenhorn Creek Resort General Manager and CFO Mike Kristoff] and I embarked on a private and public partnership where I would take ownership,” Smith says. “In an owner capacity, we broke away from the obligations or cost of corporate structure, and took out the middle management.”

After developing a negotiated lease, Kristoff and Smith made sure operations moved seamlessly between the resort and restaurant, so members and guests wouldn’t know they were two separate entities.

“It was the perfect fit to have someone take over food and beverage operations,” says Kristoff, who has worked for the resort for 11 years. “From Greenhorn’s standpoint, we get to focus more on core components: quality of the golf course, marketing, membership, customer service.

“Food and beverage is its own animal and can take on a life of its own,” Kristoff adds. “For it to run efficiently, you need someone who’s accountable at the end of the day, whether it’s making a dollar or earning its keep.”
Before Smith took over CAMPS, the kitchen had normal turnover and sometimes found it difficult to keep managers and chefs, Kristoff says. But now, he confirms, the quality of food and beverage is consistent with the rest of the facility.

Though Smith is the sole owner of CAMPS, she acknowledges that the restaurant is a team effort not only among herself, Restaurant Manager Aimee Brown and Executive Chef Vince Beluardo, but between the restaurant and the resort. CAMPS is, after all, located in the resort’s clubhouse, along with the pro shop. And it builds its offerings around the resort’s robust golf program; Smith’s goal, in fact, is to have every golfer eat or drink something before stepping foot on, or just coming off, the course. The After-Golf Works Burger (above left) is one of many special dishes offered to the golf crowd by CAMPS owner Sherri Smith (above right) and manager Aimee Brown.

Smith describes CAMPS as a dining hybrid that caters to members and golfers for breakfast and after their rounds, but generates most restaurant revenue through heavier evening crowds.

Of the 33,000 annual rounds played at the property’s Robert Trent Jones II course, 50% are played by Greenhorn Creek’s 300 members. One way CAMPS makes sure members have something special is through golfer breakfasts. In the morning, CAMPS offers a hearty, chef-prepared breakfast for golfers, sold by the golf shop for $10. The menu consists of classic breakfast offerings: coffee, eggs, potatoes, meats and breakfast burritos, to get golfers ready for the links.

“Even though we’re in a rural area, people say, ‘Gosh, your restaurant is so busy!’ It’s lively, and we’re grateful for that,” Smith says. “But you do lose a bit of your control with the membership with this type of relationship. We do things that help the members, because we want to give good food and experiences people crave.” “You do lose a bit of your control with the membership with this type of relationship. We do things that help the members, because we want to give good food and experiences people crave.”

The restaurant runs a solid bar crowd for lunch, where drinks are affordable with one inexpensive beer on tap. “Ninety percent of our customers are men who drink beer and women who split sandwiches,” Smith says.

In the afternoon, after golfers complete their 18 holes, CAMPS specializes in “heavy, golfer-style appetizers that are sometimes spicy hot and go well with afternoon beer.” The surge of afternoon sales activity is a great boost for the restaurant and it even offers incentives, such as a 50-cent beer for any golfer who turns in his or her scorecard and orders a burger.

“Most fine-dining restaurants focus on the dinner crowd and the bar, so we need to be sure we’re providing for the membership component,” Smith says.

Over the past five years, CAMPS has seen banquet numbers go down, due to a decrease in big tournaments. But it has seen a surge in regular dining.

“We’re seeing people getting cheaper items, but the volume is the same,” Smith says. “They’re not spending as much money, but revenue hasn’t decreased.”

The main dining room for CAMPS has high-beamed ceilings and 23 sets of windows overlooking the golf course with views of the first tee and veranda in a Julia Morgan-inspired building. The interior design is influenced by its rural surroundings with rustic Western themes, including tables constructed of old barn wood and stone fireplaces.
Greenhorn Creek is located in Calaveras County, made famous by Mark Twain for his account of the Frog-Jumping Jubilee that is still held each year in Angels Camp (a statue of Twain seated on a bench, holding a book, is in front of CAMPS; see photo, top of pg. 28).

But the stronger appeal for guests and community members to gather in the rural restaurant setting comes from the county’s number-one commodity: ranch-raised USDA beef. Prospect 772 Winery, whose founder is Wendy Sanda (above), is one of Greenhorn’s 12 vintner members that have golf privileges and the opportunity to share their products on CAMPS’ menu. At left, Gay Callan of Chatom Vineyards and Ron Pieretti of Prospect 772 appreciate the local offerings at one of CAMPS’ monthly wine tastings.

Located at 1,300 feet, above the fog and below the snow in Angels Camp, Greenhorn Creek is a rural getaway, but is still just a couple hours’ drive from San Francisco.

“People come up here and fall in love; they can’t believe the facility is here,” Kristoff says. “We’re working to have people realize that more quickly.” Many people who retire from the Bay Area have moved near Angels Camp, he adds, which is also just a short drive from Lake Tahoe.

The original developer of the property, which opened in 1996, took care to build the community and course around its 200-year-old oak trees. Plenty of history surrounds the area, with protected cultural resources that include the Tribelet Center and Milling Station (a large, flat rock containing 44 milling holes where foods were ground with stone pestles during the Gold Rush) and Selkirk Historic Preserve, containing the remains of the 1856 homesite of the Selkirk family, including the house, cellar, stone corral and part of an old wagon trail. In keeping with the emphasis on community, Smith decided six years ago to work toward buying local products. That kernel of an idea grew into CAMPS raising its own beef, which it buys from local ranchers at the Calaveras County Fair. The meat is used for high-end burgers, porterhouse steaks, ribeyes and T-bones on the restaurant’s main menu.
“This area is a beef-producing region,” Smith says. “It’s natural and we’re connecting with the local heritage. We support kids in [Future Farmers of America] and 4H and to augment that, we have our own steers as well. Now, it would be hard to back out of. It’s talked about and enjoyed—it’s healthy and pure, fresh ground hamburger.”

When relying on local produce, Smith and her staff have to consider shelf life, availability and speed of use for more perishable items.

“I think it’s a little bit trendy, but sustainable and healthy food is here to stay,” Smith says. 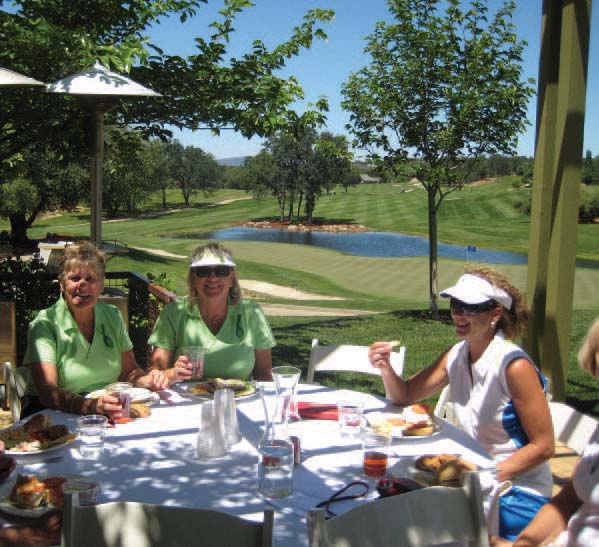 CAMPS has seen the benefits of monthly wine tasting events, with 75 percent of attendees staying for dinner and mingling with local vintners. A private vineyard garden (above right) is adjacent to the resort.

CAMPS’ other offerings include roasted pork loin, seared duck breast, fresh scallops and a lighter-fare menu that features linguini and clams, beef skewers and meatloaf, and the classic Prime Rib on Friday and Saturday nights, all ranging from $8 to $30. Though Smith and Kristoff have joked about adding frog legs to the menu as a nod to the area’s lore, they’ve erred on the side of community sensitivity, and the dish remains absent from the offerings.
Through all of what it offers, CAMPS seeks to extend its appeal beyond destination and vacation crowds who look to stay at Greenhorn Creek’s on-course lodging (known as the Caddy Shack) by also attracting diners from the community that feels invested in Calaveras County’s fertile land.

“Somebody said you can’t be everything to everybody,” Smith says, “but sometimes you have to try to be.”

The local angle isn’t only achieved through CAMPS’ food; it’s also highlighted through its wine offerings and a special program that keeps the restaurant and resort inextricably linked.

To combine the resort’s golf offerings with the nearby wine region in Murphys, Calif. (which Kristoff says is compared to Napa 30 years ago), Greenhorn developed the Vintner’s Membership, which provides 12 locally owned-and-operated wineries with golf privileges.

Through this new twist on standard wine clubs, the program gives vintners access to the resort’s marketing efforts and brings people onto the course who might not normally utilize it.

“We saw an opportunity to work with vintner members,” Kristoff says. “Even within our own membership, we have some hobbyists who have won some very prestigious honors just for being hobby winemakers. They enjoy it and we thought we could pair this together with golf privileges for members, so they could use our amenities. We created a program that would help us market each other.”

In turn, CAMPS gives the wineries a forum for displaying their goods through special wine tastings, winemaker introductions, seasonal wine dinners, educational seminars, flight tastings and links on the resort’s website, plus additional exposure through promotional releases to the resort’s 18,000 E-club members. Wine tastings are held in a small venue known as The Library, which seats 26 people and is also used for business or private dinners.

“They can do one education event about where vines are grown, or what’s special about how they make their wine or process,” Kristoff says. “I think members enjoy it, and the vintner members do as well.

“They’re very unique wineries, and each one has a story of their own,” he adds. For example, Ironstone Vineyard has an outdoor amphitheatre for a summer concert series, and a 44-pound crystalline gold leaf nugget—the largest in the world.

CAMPS also reaps benefits from the program by bringing wine enthusiasts into the restaurant and featuring a different winery every month on the menu.

“Seventy-five percent of people who attend vintner’s membership education programs or tastings stay for dinner, and the wineries sell their wine,” Smith says. “The same percentage buys wine through us. It works as a catalyst to bring members to wineries for events, and exposes members to new opportunities.”

The unique membership program also serves as a practice round for the wine club the resort plans to unveil next year for individual members.

“When we put together the vintner’s membership, Sherri embraced the program,” Kristoff says. “I wanted her to provide quality appetizers and make sure things run smoothly. It has been quite a success for all involved.”