For most of its first 100 years, Charlotte CC provided exemplary service despite its clubhouse’s limitations. Now it has a building that properly supports its first-class reputation, inside and out.

Recognizing the special nature of the service experience at Charlotte Country Club has always been easy—anyone who comes to the oldest club in North Carolina’s largest city is immediately struck by the genuine and gracious hospitality that is extended to every member and guest.

But recognizing, and fixing, the many challenges that Charlotte CC’s staff had to overcome to provide its exemplary service took a little longer—almost 100 years, in fact.

Long before he became the club’s Chief Executive Officer in 2003, Damon DiOrio, CCM, CCE, first saw the service obstacles and inefficiencies that the club’s staff had to work around while he was employed as a college student in the Charlotte CC clubhouse, which had been built in 1931.

The impediments came in many forms:

A Race Against Borrowed Time

Warm rooms and views now fit with the inviting feeling always offered by the exterior of Charlotte CC’s clubhouse, and by the club’s staff.

But even while saddled with these infrastructure burdens, Charlotte CC had not only survived, but grown and prospered through the years—a testament to its solid service tradition that DiOrio, who had come back to the club and worked his way up through several management positions after finishing college and then working for the Disney organization, took to an even higher level as its CEO (see “How Charlotte CC Stand Out From the Crowd?” C&RB, September 2005).

And because the club’s classic, colonnaded exterior had always stayed in good enough shape to still stand, like a Hollywood-lot front, and belie the barely functioning shell behind it, members weren’t aware of how badly neglected the unseen parts of the building had become, or of how much extra effort the staff was having to expend to continue to do their jobs so well.

DiOrio knew, however, that he, his staff, the clubhouse and the club were all on borrowed and rapidly vanishing time. With Charlotte CC’s 100th anniversary set to arrive in 2010, he also knew his most important executive decision as CEO would be to immediately start a process to not only rescue the building and upgrade its functionality, but also to position the club so it could continue to thrive in its second century. The fully renovated men’s locker room now features a lounge area and bar that has become a popular gathering place and strong new revenue producer for the club.

“When our clubhouse opened in 1931, the club generated $121,000 in annual revenue and employed 42 staff members,” DiOrio says. “Over seventy years later, the same building, in much worse shape after decades of deferred maintenance, was the base for an $11 million operation with 220 employees.

“There had been dozens of clubhouse ‘renovation’ projects over the years,” DiOrio adds, “but they were all piecemeal and patchwork efforts, without much thought given to documentation or coordination. Prior to 2003, Charlotte Country Club had never had a long-range, strategic capital plan.”

For outside expertise that could help him put together such a plan and then set it in motion, DiOrio turned to Baltimore-based Chambers. The firm is well-known for its architectural and design work in the private club market, but DiOrio wanted Chambers to serve as a full partner, with a role that would also include formulating and facilitating a master plan, financial modeling, membership communications through town-hall meetings, and conducting the interviewing and selection process for the project architect, contractor, construction supervisor and other team members. 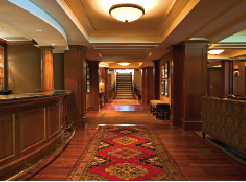 Wider corridors and stairwells have greatly improved accessibility for both members and staff.

DiOrio and Chambers then worked with a task force created by Charlotte CC’s Board of Governors to begin a comprehensive review of the club’s facilities, including engineering studies of the clubhouse’s mechanical, electrical and plumbing systems. A new planning committee used the results of that review, and input from a 2005 member survey, to begin to develop the master plan.

As the plan took shape, Charlotte CC’s members fueled its momentum through active participation and support—especially as they became more aware, after taking behind-the-scenes clubhouse tours and seeing what the engineering studies revealed, of just how precarious the situation had become.

While the club’s by-laws do not require membership approval for capital expenditures, polls taken as the master plan unfolded showed that 90% of Charlotte CC’s members endorsed what grew to be a $32.4 million project. Just as significantly, over 70% provided input to surveys that helped shape the plan’s direction and specific components, and nearly a quarter of the club’s 1,020 members got actively involved on project-related committees or focus groups.

The first results from the master plan (which, beyond the clubhouse and golf course, also included improvements to the club’s golf practice facilities, greeting center, and separate youth activities center and boys/girls locker rooms) were unveiled with the 2007 restoration by Ron Prichard of Charlotte CC’s Donald Ross course.

Attention then turned to the clubhouse, which would be kept open as construction was completed in phases on its three levels. While the reconstruction aspects proved even more formidable than anticipated as the work began—over 30,000 lbs. of steel were needed just to provide enough temporary load support for the badly weakened structure—this was always as much of a restoration as a renovation. As the dozens of coats of paint and other cover-ups and temporary fixes that had been applied over the years were stripped away, specialized craftsmen and artisans were brought in to help properly restore the original moldings and millwork, chandeliers, murals, antique furniture and other priceless pieces so they could all once again be a full, unhidden part of Charlotte CC’s special history and grandeur.

At the same time, no attention to detail was spared as the project incorporated many new features and improvements—extra service closets, audio/visual touchpanels, centralized climate controls—that could now properly complement and assist the staff’s service mission. “This project was as much about creating the right operational efficiencies, and providing the tools and abilities needed to provide a first-class service experience, as it was about restoring our treasured clubhouse,” DiOrio says.

Six years before Charlotte CC’s 100th anniversary, Chief Executive Officer Damon DiOrio set a master plan in motion to ensure that not only the historic clubhouse and golf course, but the club itself, would be properly positioned to continue to thrive in its second century.

Charlotte CC’s members have many new features of their own to enjoy in the clubhouse as a result of the project, such as the new lounge area with staffed bar in the men’s locker room that quickly proved to be immensely popular and a source of significant new food-and-beverage revenues. But another key goal, DiOrio says, was to not have the project overwhelm members with a lot of new things to get used to.

“We didn’t want them to feel they had walked into a new club,” he says, “If that had been the case, the project would have failed. Instead, we wanted members to come in and immediately feel happy that they had their same club back, better than ever, and ready for them and their families to use and enjoy for many more generations.”

Success By All Measures

Since the restoration work was finished right before Thanksgiving 2009, DiOrio says, the club has already seen encouraging results both in operational savings (energy costs down 18%, significant reduction in food costs) and revenue enhancements (casual dining up 19%). He is just as pleased that his staff is now “consistently hitting” service measures, such as 12-minute food-ticket times, that were much harder to achieve around the pre-restoration obstacles. Curved banquettes that can be used with tables set up for either four or eight have become a popular central feature of the club’s renovated Dogwood Room.

But this certainly shouldn’t be surprising, given Charlotte CC’s history of delivering service excellence, regardless of the conditions. Even amid all of the construction, reports Rick Snellinger, CEO of Chambers, Charlotte CC took the time, after work on the upper level had been completed, to “do something that’s never happened in any project I’ve ever worked on.

“All of the professional companies involved with the project were invited, with guests, for an incredible wine dinner, so we could show our spouses what we’d been working on,” Snellinger reports. “At the end of the dinner, the spotlights came on, the staff and kitchen help came out, and they applauded us.

“It was an experience that raised the hair on the back of your neck,” he says. “And then after we finished the lower level, they did the same thing for us again.”

Once again proving that recognizing what’s special about the service at Charlotte CC has never been difficult—and now it will be easier than ever to spot, for the next hundred or so years.