You can get a nice “Member’s Special” breakfast in the Members Club grill at The Clubs at St. James Plantation—egg, bacon, toast, fresh coffee, all served on good china in a pleasantly appointed, bright room with a great view of one of the club’s four scenic golf courses.

It’s pretty much the same breakfast as a Denny’s “Grand Slam,” but without any local-diner commotion. And when members get their bill, they’re charged a Denny’s-level price ($4.25). The similarities, in both cases, are not coincidental.

“Members were telling us they weren’t coming [to a club dining room] because they could get a $5 breakfast at a corner diner [off property],” says Jack Hrad, General Manager for the four clubs within the St. James Plantation property. “The Member’s Special serves a purpose, so members don’t feel they have to go out in the morning to get what they want.”

“Serving a purpose” is the driving force for just about everything to be found at St. James, a community of about 3,000 properties located in Southport, N.C. (about 40 miles south of Wilmington, near where the Cape Fear River meets the Atlantic Ocean).

It’s not a quick trip to drive out of the vast, 5,000-acre St. James Plantation property, and then down the adjoining state highway in either direction, to find viable commercial options for dining, shopping or recreation. But management of The Clubs at St. James, unlike many operators of gated-community clubs, doesn’t assume its members are captive, or get complacent about what’s available in the outside world.

“On any given night, we have about 1,900 people on property,” says Hrad. “All but a small percentage of property owners are club members—membership is optional, but there’s a strong financial incentive to become a member at the time of [property purchase]. So about 98% of the owners are also members of at least one of our four clubs; most have membership privileges for at least three clubs, and many for all four.”

Surveys of St. James Plantation property owners, Hrad reports, have indicated that 87% chose to invest there, versus other real estate options, because of its golf courses. But, he adds, just 62% have memberships that include golf privileges.
“So a significant percentage of our ‘golf community’ is here not because they’re avid players, but because to them, golf courses are primarily just pretty and green,” Hrad notes. “That’s certainly an opportunity to develop more golfers—but it’s also a reminder to tend to the many other things that are important to people here, too.”

Picking Up the Pace
Hrad has been at The Clubs at St. James since 2005, after ownership (St. James Properties) brought in Troon Golf to manage the operations.

Taking on “four clubs rolled into one” was an unusual engagement for Troon, says Hrad, a 35-year industry veteran who came over from the Troon-managed Club at Westin Savannah Harbor (Ga.), and whose experience also includes management positions with several ClubCorp properties.

The Troon team soon saw, however, that as large as St. James was, it still could be operated as one club entity, because of the determination of the St. James Plantation ownership to create a cohesive community atmosphere, even in such a large, gated setting.

“These are not wheeler-dealers just looking to build and sell a bunch of properties and then run off, and who throw up a club component as part of the initial attraction, but then fail to develop it,” Hrad says. “Ownership [at St. James] is still held among the same three families who originally acquired the land [which used to be a Weyerhaeuser timber plantation] 20 years ago; many of their children are now active in the business, including [current President] Jay Atkinson.”

This has certainly helped to create a more stable foundation for club life at St. James, Hrad feels. But when Troon’s management engagement began, there were still some gaps in the club offer ings that needed to be addressed—most notably, in food and beverage.

“We really had only one operative restaurant, and a ballroom that was empty most of the time,” says Hrad. After adding more outlets throughout the property and turning the 180-person banquet room into a viable catering operation that is now getting steady bookings for member-related weddings and other functions, The Clubs at St. James now operate with a bona fide F&B department. Under the direction of Wendy Barela, who has used her restaurant background to revamp and expand menus on both the fine-dining and casual sides, and with a head chef now in place for each club, members can find something to fit their desires and budgets during each day part.

Under Troon’s watch, St. James has seen a 40% increase in F&B revenues, Hrad says. Even more significantly, there’s clear evidence of community-wide patronage. “Our latest annual member survey showed that 98% of the respondents now use one of our F&B facilities at least once a week—and 30% use them four times a week or more,” he reports.

Shaping Up in All Areas
At the same time that F&B has been revived, already-strong activity offerings at The Clubs at St. James Plantation have been bolstered further. A third fitness center is now being planned, to continue expansion of a program that, according to Director of Athletics Sean Zelinsky, now sees close to 80% of St. James members participate in some form of exercise-related activity on a regular basis.

Zelinsky and a staff of 18 full-time instructors, supplemented by independent contractors, have built the program by deemphasizing “fast-food fitness” (his term for large group sessions) and instead attracting use of the clubs’ facilities through one-on-one programs tailored to each member’s needs and preferences.

“It doesn’t have to be the same workout three days a week,” Zelinsky says. “It can be taking a walk on the property on Monday, doing some aerobics on Tuesday, and swimming on Wednesday. We’re just trying to get everyone in here for an complimentary initial orientation to learn about all we have, and then take a fitness test that helps us see what would be the best things to set up.”

On the tennis side, Director of Tennis Brian Preston is already making plans to fill three new courts that are coming on stream and will give the club a total of 13.

“We now have 250 members who play once a week, and a very active tennis association,” says Preston. “A lot of the growth has come from an active program for team play. But at the same time, we always make sure to emphasize there’s plenty of opportunity for open tennis six days a week, where you can just show up and play, without a commitment. Usually, once the other tennis players find someone new out here, they quickly welcome them and make them part of the group.”

Golf Keeps Going
In the midst of all of this activity, of course, golf has hardly been ignored at The Clubs of St. James Plantation. The newest course and club, a Nicklaus Design for the new Reserve Club, opened in 2006, adding 18 holes and a fourth club to a property that already offered The Players Club (18 holes), The Members Club (27) and The Founders Club (18).

The opening of The Reserve course helped boost overall rounds by 10% last year, Hrad reports, at a property that sees year-round use of each course at levels ranging from 200 to 350 golfers per day. “We have some people who play seven times a week, and the added variety [from the fourth course] will just add to the interest among people who want to play that much,” says Anthony Pagliari, one of the club’s Assistant Golf Pros.

But here, too, St. James management isn’t getting complacent—while there are obviously plenty of avid and active golfers on the property, there’s also that gap between the 87% of the property owners who were attracted by the golf courses, and the 62% who actually play. Director of Golf Dave Kjome and Director of Instruction Barry Walters are actively trying to develop new players through a new, in-house Golf Academy at St. James that’s been created to replace a contracted instruction school option.

“One of the benefits of being a club community, and not a resort community, is our ability to reach all the people who haven’t had the time to become golfers yet, but now want to learn the game,” notes Hrad.

Because of his success in leading continued growth in all of these areas and further enhancing the club atmosphere at St. James, Jack Hrad was named Troon Golf’s GM of the Year for 2006. Just as importantly, behind the scenes he has fostered a new cohesion among long-time St. James managers and new ones brought in through the Troon transition.

“It used to be each department didn’t really know what the others were doing,” says Director of Agronomy Conrad Broussard, who’s been at the property 11 years. “Last year, we went to a bonus program that emphasizes the success of the overall operation, and makes it clear how we need to work together as a team.”

The Clubs at St. James staff worked well enough together to earn a 95% overall satisfaction rating in the latest member survey—but Hrad’s not going to let awards or high scores change the overriding sense of purpose. “We still have plenty of room to refine what we do,” he says. He knows that even when you hit a grand slam, you’re still only as good as your next at-bat. 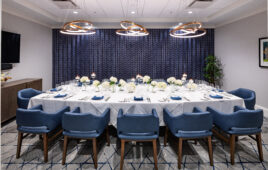