For the first time since the pandemic first hit, clubs across America are planning a full complement of holiday celebrations and events, many of which revolve around feasts of classic, ethnic and innovative foods of the season.

Themed banquets, buffets, brunches, teas, even barbecues rank high among the spirited celebrations members eagerly anticipate during the holiday season at their clubs.

“With the relaxation of pandemic restrictions, we’re now back at full throttle, planning all kinds of events throughout the month,” says Samuel Brod, Senior Executive Chef at The Landings Club in Savannah, Ga. “We had been doing mostly individual portions and takeout, but now buffets are coming back full bore.”

Throughout December, Brod and company prepare lavish themed repasts highlighting beloved traditional foods of the season from two brunches with Santa, each of which usually hosts 500 attendees; an elegant tea party; a golf course barbecue and laser show that attracts more than 1,000 guests, to two wine pairing dinners. The season culminates in a grand New Year’s Eve Myriad Ball which offers the 1,500-to-2,000 guests 10-to-12 “unique experiences” showcasing a bounty of fancy fare that overflows the club’s five dining rooms into a tented area.

One of the two wine pairing meals at the club and one of its most beloved traditions is the Holiday Ornament Dinner in mid-December. It begins with a reception serving butler-passed hors d’oeuvres and, this year, will continue with olive oil-poached Alaskan halibut, cream of mushroom soup en croute and a classical veal Oscar. Dessert will be a mini holiday “ornament” torte and each guest will be gifted with a keepsake ornament to take home.

Surprisingly, finding staff to work the club’s Christmas Day buffet and dinner extravaganzas is no problem for Brod.

“We use volunteers whom we incentivize with double pay plus a bonus based off sales from the day,” he explains. “We bring in eight to 10 employees in the kitchen plus about 10 to 12 servers.”

For Christmas Eve, Brod offers an extensive to-go menu. He usually sells between 60 to 70 meals.

Brod pointed out that it takes the club at least six months to plan the New Year’s Eve Myriad Ball. In addition to three lavish “cruise ship-style buffets,” the event leads guests from one “experience” to another in various dining rooms and tented areas. One experience, for example, might be champagne on ice with caviar, another might be a carnival tableau or Bavarian biergarten. In still another room there might be a display of cheese and a mind reader for entertainment.

Although New Year’s Eve is usually a time for gatherings of friends and family, Brod acknowledges that, for some singles and widowed members, theirs is a party of one. To brighten their holiday, he puts together a celebratory to-go meal. Two clubhouses with a total of five kitchens allow Brian Dennis, Executive Chef at Country Club of Landfall in Wilmington, N.C., to host four or five private parties ranging from 150 to 450 guests at the same time. Staffing is not an issue because cooks from the pool and sports center can be added to the event staff count when those two venues are closed.

“We get crushed with holiday parties the first weeks in December, but that lightens up as Christmas comes closer,” Dennis says.

Although the club is closed on Christmas, Dennis offered takeout holiday dinners with heating instructions for pick-up the Friday prior to the big day.

“The first time we did Christmas takeout was during COVID and it was very popular,” he notes. “That’s why we decided to bring it back this year.”

For the club’s New Year’s Eve cocktail party that is popular with younger members, he makes sure that all the passed hors d’oeuvres are “high end” and “crowd pleasers” such as latkes with smoked salmon spread and caviar, lobster tempura lollipops, octopus ceviche cups and a nod to his vegetarian and vegan members with plant-based meatballs.

In addition to two carving stations, one for New Zealand lamb racks and the other for beef tenderloin, two grand displays will offer bounties of charcuterie and seafood. Among the seafood selections will be crab shooters and tuna three ways—seared ginger, peppered and blackened.

A three-course, prix fixe, reservation-only New Year’s Eve meal in the formal dining room will start with a first course of arugula and grape-stuffed goat cheese with pistachio crust, seared foie gras or lobster bisque. Entrée selections will be filet mignon, lobster tail or duck a l’orange. Dessert will be a shared plate of petite desserts.  In this more intimate setting, the chef can accommodate up to 150 diners. Mark Beggs, Executive Chef at the Cincinnati Country Club in Cincinnati, Ohio, and Paul Kochanowski, the club’s Executive Sous Chef, know their members’ food preferences well. And, for the December holidays, that means putting their own upscale twists on comfort foods.

For last year’s ladies’ group holiday luncheon, for example, they created an elegant chicken in puff pastry enveloping a breast, mushrooms, beurre blanc, slow-roasted tomatoes, mozzarella cheese and pesto. The edges of the pastry were braided for extra panache.

A long-time favorite holiday luncheon selection at the club is a signature cheese souffle made with classic Gruyere and served with a Hollandaise sauce.

“The maximum number of souffles we can do at one time is 30 due to oven space, so they’re best for smaller parties,” Kochanowski notes.

For seated dinners, members often request colorful Mediterranean-style salmon on a bed of grains and vegetables.

“It’s a beautiful plate,” he says. Among the most club’s most popular requested desserts at dinner parties is chocolate croissant bread pudding made with Triple Sec or Grand Marnier or chocolate or traditional pots de crème. An easy holiday showstopper is a mini sundae made with peppermint Graeter’s Ice Cream, a  hometown hero brand.

This year, Dinner with Santa has been switched to Brunch with Santa. Aside from Saint Nick himself, a star attraction will be Beggs’ special pancakes which he makes extra light and fluffy by adding whipped egg whites. He expects to serve more than 400 members and their children at this event.

Although a majority of members prefer to have their Christmas Eve buffet dinner at the club (Beggs expects about 500 members to attend), he always makes accommodations for those who cannot get there for this gala event with a special takeout menu composed of about 80% of the selections available on the buffet. He assigns one or two staffers to take care of these orders which are set to be picked up between 4:00 and 5:30 p.m. to assure that all hands will be on deck for the main event in the dining room.

Details are important to Beggs, right down to the carry-out containers.

“We send the food home in attractive cardboard boxes and reusable logo bags,” he explains.

All indicators are that prior to Christmas, the Cincinnati Country Club will be keeping its three kitchens humming, executing family and business parties ranging from 35 to 300 guests, as well as its own events accommodating upwards of 500, he says. After, a New Year’s Eve wedding is on the schedule.

At The Landings Club in Savannah, Ga., Executive Chef Samuel Brod brings together a range of holiday traditions to represent the various cultures of its members. For Hanukkah, he prepares a to-go meal that feeds two or four featuring such Jewish specialties as matzah ball soup, potato latkes, beef brisket, Zaatar spiced roast leg of lamb, potato kugel and jelly doughnuts.

On Christmas Eve, the club goes Italian with Brod’s own distinctive take on the Feast of the Seven Fishes. The seafood-centric feast begins with an Insalata di Mare with octopus, shrimp, clams, mussels and lobster, then moves on to the club’s fresh spin on Oysters Rockefeller made with caramelized collards, cream cheese, red pepper, pork belly and Asiago cheese. A chef-attended risotto bar presents seafood-centric toppings such as smoked salmon, blue crab meat and grouper bites as well as a choice of rices and sauces. C+RB 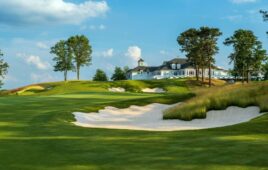