Club+Resort Business Associate Editor Phil Keren visited Champions Run and Field Club of Omaha in Omaha, Neb. in October. In this column, Keren shares his experience visiting with leaders of both sites.

A chance to visit country clubs around the U.S. was one of the reasons I accepted the job at Club + Resort Business this past spring.

I recently returned from visiting two clubs in Omaha, Neb.: Champions Run and Field Club of Omaha. After spending about six months interviewing country club employees and reviewing industry press releases, it was nice to visit with club leaders on their home turf.

By emphasizing fun and entertainment, Champions Run prides itself on creating unique and memorable experiences for members and guests. Creative Director Ben Lorenzen, who gave me a tour of the facilities on my first day in Omaha, says he enjoys working in the country club business.

“I love the club industry because I feel like it’s 10 businesses in one,” Lorenzen says. “You have golf, tennis, food and beverage. It makes every day really different.” The “every day is different” comment was echoed by General Manager Andy Reetz, Director of Agronomy Greg Jones and Executive Chef John Benton. They clearly enjoy their jobs and the various challenges that they deal with each day.

Lorenzen showed me the golf course, fitness center, tennis courts, pool area with splash park and climbing wall, playground, dining areas, and banquet rooms. The club has made facility improvements during the last few years in conjunction with a master plan that was crafted from a member survey conducted in 2017. The dining rooms, entrance and banquet rooms on the clubhouse’s main level were renovated last year.

Lorenzen also serves as the club’s Director of Aquatics and Fitness and oversees a youth swim team with more than 400 participants. The program has grown in popularity due to a focus on playing games and having fun rather than swimming lap after lap.

After seeing the facilities and chatting with several employees, Lorenzen and I had lunch in The Fairway Room, which offered a spectacular view of the golf course. The meal was delicious and I enjoyed learning more about Lorenzen as I glanced at the Champions course on a beautiful sunny day.

Following the meal, it was time to take a few swings on the golf course. Using a set of demo clubs, I played the Front 9 with Mitch Klooz, a PGA Assistant Golf Professional at Champions. After not playing much golf for the past decade, I’m again playing more and it was inspiring to play with a golfer as talented as Klooz. While I was there, I learned that Klooz shot a course record 58 at Champions in August. Klooz told me he eagled every Par 5 during his round.

My shots improved as I got more acclimated to the clubs that I was using. Besides the wind, another challenge was playing shots on hills where the ball was either on lower or higher ground. Klooz was a great tour guide as he pointed out recent upgrades and discussed upcoming improvements.

I stopped by Field Club of Omaha the next day to speak with General Manager Greg Gilg, and while the weather was cooler, it was still a nice day to check out the golf course. Gilg says the club is adding a third set of tee boxes and renovation work is occurring on holes 14 and 15. The 14th hole will be closed until May 2023, while the 15th hole was recently closed for a month and reopened as a temporary Par 3. Gilg adds the 15th will become a Par 4 in the spring after the sod in the tee box takes root. Some fairway bunkers are being installed on the 5,200-yard course to add in a challenge for golfers who hit long tee shots. “These young guys hit the ball a mile,” Gilg says. “[When] you get into some of these league match-ups, there aren’t enough strokes for guys who are hitting drivers up on the green. We wanted to make sure we had some kind of answer to that.”

Club leaders decided to offer complimentary golf lessons to golf members starting in 2020. When club officials researched the issue, Gilg says they only found one other facility in the U.S. that provided this benefit. He admits that, if officials had realized how much the pandemic was going to impact their business, they likely would’ve delayed implementation. Still, Gilg says the free lessons are “one of the most attractive benefits” for golf members, and the program has “stabilized a category of membership that had always had lax demand when compared to our social and clubhouse categories.”

I plan to share more details about Champions’ unique swim program and Field Club’s complimentary golf lessons in upcoming editions. I enjoyed the trip and am looking forward to visiting more clubs to hear about other exciting and innovative programs. 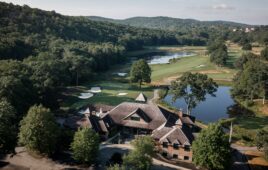