The surname “DiOrio” has an indirect connection to the Italian world for honor. But there is nothing indirect about the sense of honor that Damon DiOrio has always felt, and openly displayed, both for his position as Chief Executive Officer of Charlotte (N.C.) Country Club, and for his chosen profession as a club manager.
The origins of DiOrio’s deep-rooted allegiance to Charlotte Country Club are well-known. It is the only private club he has ever worked for, starting first when he came from Rhode Island to study at North Carolina-Charlotte and began working at the club while in school.
After some time with the Disney Organization after graduating, DiOrio’s career brought him back to Charlotte Country Club, and he worked his way up through several management positions to eventually become its GM/CEO.
Along the way, however, everything he’d worked and lived for was threatened by two serious battles with leukemia. DiOrio credits the members of Charlotte Country Club with playing a huge role in helping to save his life during those times, through the kindnesses and support they extended to him and his family as he fought the disease.
DiOrio has been healthy for several years now and has since more than repaid the debt he feels to the club, through his tireless efforts to lead it to new levels of excellence. Most notable among these was his direction of the massive two-year, $32.4 million master plan project that restored both the club’s Donald Ross-designed course, and its classic 70-year-old clubhouse, to their original elegance while adding new features and functionalities that properly positioned Charlotte Country Club for the future as it started its second century of existence in 2010. His experiences, in work and life, have also reinforced a special obligation DiOrio has always felt to honor and give back to the club industry, by mentoring up-and-coming professionals with his well-known “Golden Rules for Success” and other forms of advice and counsel. He’s also done more than his part to provide the industry with new top-management talent that’s been groomed under his own watch; three former assistants to DiOrio now serve as General Managers for prominent clubs. 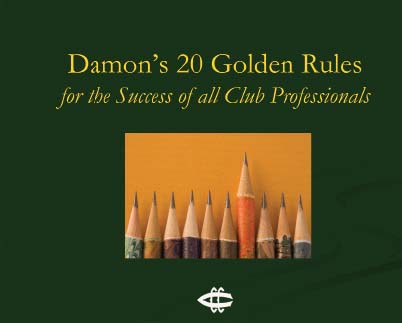 Damon DiOrio says he has “expanded and enhanced”
his Golden Rules for club management success based on his
experiences over the years. No matter what their current form
might be, he still “uses them every day.”

And now, in recognition of all of these efforts, Damon DiOrio has earned an exceptional honor of his own, as the 2011 winner of The James H. Brewer Award, in the category of Country/Golf Clubs with 600 or More Full-Privilege Members, for the Excellence in Club Management Awards, co-sponsored by the McMahon Group and Club
& Resort Business.

Good Advice for All
DiOrio’s “Golden Rules” were originally written as a guide for assistant managers, but he has since amended them to apply to “the success of all club professionals.” He says he has also “expanded and enhanced” the rules, based on his experiences over the years and on how the club industry has changed.
But one thing has remained constant: DiOrio says he himself makes it a point, “every day,” to not only review but follow the latest versions of his rules, which include such reminders as “Our members do not care if you are having a bad day” (#5); “All successful managers take member complaints personally” (#8), and “Yesterday’s standard of excellence is not good today” (#10).
“They all speak to relevant core values, and as such they give anyone who wants to be a good manager a framework for success,” DiOrio says.
As he has gained experience—and grown older—DiOrio also admits that he’s recognized a disconnect between the steady and patient approach that he, and many of his peers, took while advancing their careers, and the expectations for much more immediate gratification now often seen, and expressed, among members of the millenial generation.
Rather than simply lecture the brash youngsters that they should be prepared to put in their time like he and many other leading managers have done, DiOrio has taken the time to try to understand their point of view and mindset. That led to his crafting a Management Training Schedule that provides a detailed roadmap for how in just seven years, an assistant manager fresh out of school can become an assistant GM, with a six-figure salary and all of the experience needed to pursue GM opportunities.
The Training Schedule (available, along with the latest version of the 20 Golden Rules, with the online version of this article at clubandresortbusiness.com) provides a comprehensive, year-by-year outline of what activities and duties should be learned, what continuing education steps should be pursued, and even what self-help books should be read.
“There’s been significant contraction in the club business in recent years, but it is still certainly possible to have a six-figure job in this industry by the time you’re 28 years old,” DiOrio says. “But the one thing that hasn’t changed for any of us as club managers, no matter where we are in our careers, is that you can never be in ‘sustain’ mode. You have to always have a plan for moving forward, both for your club and your career. The only constant in life is change, and if you don’t evolve, you’ll be left behind.”