After working behind the scenes to ensure the movie’s success, Rick Sussman took the lead in making Sharon Heights G&CC a classic property.

If you enjoyed the part in “Tin Cup” where the pro golfers bet if a ball can be hit from inside the clubhouse bar and through its open doors to knock a pelican from its perch outside, you have Rick Sussman to thank. He helped the filmmakers set up that scene, and many others that were shot at ClubCorp properties in Texas, while a Regional Vice President for the management company in the mid-1990s.

For his help, Sussman got a fleeting credit at the end of the movie and a nice customized golf bag that he now keeps in his office as General Manager of Sharon Heights Golf & Country Club in Menlo Park, Calif.

Also in that office are many other mementos from a wide-ranging and eventful career that’s taken Sussman to places like Windows on the World in New York and a fine dining club in Houston—where the oil industry slumped, and 700 of the club’s 800 members canceled their memberships, six months after he arrived.

Last year, Sussman had to make room for something else in his office—the latest listing of Platinum Clubs of America that included Sharon Heights for the first time in its 45-year history.

And because of how he’d helped the club improve to achieve that recognition since arriving in 2004, Sussman now has another career memento to display: The Excellence in Management Award from the McMahon Group and Club & Resort Business.

Setting the Sights
In the first staff meeting that Sussman held after coming to Sharon Heights from Mission Viejo (Calif.) Country Club, he brought up the Platinum Club designation and told his team, “Someday, we’re going to get to that.”

Of course, saying it—and doing what was needed to earn a high enough rating from the Platinum Club survey of private club managers and presidents—were two different things, especially with Sharon Heights in management turmoil, with a member actually serving as temporary GM for several months before Sussman arrived.

But Sussman had already seen enough about what makes clubs great in his career to know that all of the right ingredients were in place at 550-member Sharon Heights. The task at hand was to put everything together in a style more befitting of a club that commands a premium initiation fee of nearly $300,000, sits on property near Stanford University that was once owned by the family of William Sharon (former U.S. Senator from Nevada and developer of San Francisco’s famous Palace Hotel) and had just opened an impressive new clubhouse in 2003.

“I knew [Sharon Heights] had a long-standing reputation as one of the leading clubs in the area,” Sussman says. “Even though the club itself was only 45 years old, there was plenty of tradition we could be proud of, especially with the history of the property and how influential [the Sharons] were in the development of the area. I saw the challenge as one of creating new traditions that could make the most of the ones we already had.”

To that end, one of Sussman’s most important initial acts came when he got word that historical drawings of the original Sharon estate were going to be sold at a Sotheby’s auction. He hustled to direct their purchase for the club, and saw to it that they were then properly and prominently displayed, as part of a newly created area in one of the clubhouse’s main corridors.

“The [new clubhouse] was certainly very nice, but it was just kind of sterile because it had no sense of history,” Sussman recalls.

When Sussman looked at the people of Sharon Heights, he saw a similar structural problem. Very talented department heads and staff members were in place—as well as an enthusiastic membership and a supportive Board—but a clear sense of teamwork was lacking.

“There were walls between the various members of the team that needed to be broken down, and overall direction was fragmented,” he says. “The bottom line was, we needed to have more consistency in how we all worked together to meet members’ expectations.”

Judging by how those members—current, new and prospective—have reacted in the past three years, it certainly appears that objective has been achieved. “We’ve come a long way,” Sussman says. “Dining revenues have doubled, we’ve added a new social membership category and an average of 12 new members a year, and we’ve lengthened our waiting list to join. I think we’ve restored the right perception of quality and value that a club with this type of reputation should have.” C&RB 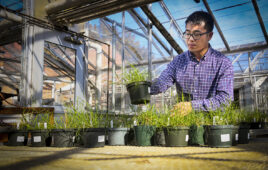