In early 2018, JohnMichael Lynch, Executive Chef of Druid Hills Golf Club in Atlanta, Ga., was looking for new ways to enhance the club’s wine dinners, so he decided to invite chefs he had worked with at nearby Cherokee Town and Country Club for a guest event.

Everyone loves a reunion story. Whether it’s long-lost friends or long-lost family, the narrative always works.

JohnMichael Lynch, Executive Chef of Druid Hills Golf Club in Atlanta, Ga. knows this. And he tapped into that sentiment when he invited six chefs he worked with, when previously serving as Chef de Cuisine at Cherokee Town and Country Club in Atlanta, to join him at Druid Hills for a reunion dinner unlike any other. The chefs who at one time all worked together at Cherokee Town and Country Club in Atlanta got back together for the special “Chef Reunion Dinner” at Druid Hills Golf Club.

“After culinary school, I was fortunate to be able to work with J. Kevin Walker, CMC, for nearly seven years,” says Lynch. “When I left Cherokee, I moved to a number of other clubs before I took on the Executive Chef position at Druid Hills in 2017—but I’ve kept in contact with many of the chefs I worked with during my time at Cherokee.”

In early 2018, Lynch was looking for new ways to enhance Druid Hills’ wine dinners, so he decided to invite Walker, who had recently returned to the area as Executive Chef at Ansley Golf club, to be a guest chef. When Walker said yes, Lynch thought it might be even more exciting if he invited other chefs who also worked with him and Walker at Cherokee.

“Once a chef committed, I gave them a course, and we began building the menu,” says Lynch, who worked with Brookins and others on his team at Druid Hills to develop pairings based on the flavor profiles that the chefs committed to.

On the first day, the guest chefs prepped together. “It was just like old times being in the kitchen again—maybe a little worse, considering we are all ‘chiefs’ now,” says Lynch, who added that a lot of time was spent joking around and reminiscing about past events they had executed together.

”We also talked a lot about our current operations and the challenges we each face,” Lynch says. “Although it’s been several years since we cooked together, you could tell how [Walker] has impacted each of us, both technically and professionally.” The “Chef Reunion Dinner” concept generated considerable buzz within the club chefs’ network, as a novel way to take the popular guest-chef concept to a new level.

The dinner, which was sold out to 40 members, began with a reception and passed hors d’oeuvres.  When the members sat, the guest chefs came out of the kitchen together and spoke a little about their experience together, before presented their dish.

“The dinner went off in timely fashion, and all the chefs helped each other out,” says Lynch. “We had a pre-shift meeting with the back of house to determine needs for courses, and we also had a pre-shift with the front of house. All the details were worked out well before the dinner started.”

And despite having seven chiefs in the kitchen, the only real challenge was that every chef wanted to plate in bowls.

“It was a little bit of being a student again,” says Lynch. “Each of us picked up at least one thing from each other, whether it was cooking or operational. It was a great time. The members loved the experience and the food. And it was good for my staff to be able to see the guest chefs’ food and execution.”

Lynch was proud to be able to host all of his peers at his club and the membership was thrilled with not only the amazing meal that was prepared, but also by being able to see how different chefs prepare different dishes.

The reunion dinner idea also generated considerable buzz within the club chefs’ network, as a novel way to take the popular guest-chef concept to another level.  The next day, Walker was moved to send out this post on social media: “I am struggling to find the words that would effectively convey the pride and admiration I experienced. Watching these fine chefs, all running their own operations, all displaying their individual talents in different ways [and] all enjoying spirited ribbing and educational conversations was inspiring, humbling and quite surreal [because] all of them, at one time or another, passed through my kitchen.”

The Goal: After JohnMichael Lynch, Executive Chef of Druid Hills Golf Club, learned that one of his mentors, J. Kevin Walker, CMC, had moved back to Atlanta to become Executive Chef of Ansley Golf Club, he invited Walker to be a guest chef at his club. As plans came together, Lynch then decided to invite other chefs he’s worked with, to host a one-of-a-kind reunion dinner.

The Plan: In all, seven chefs participated in the event and each was responsible for his own course. Lynch quarterbacked the menu development and worked with his team at Druid Hill to create wine pairings. The dinner was opened to the membership, but capped at 40 seats. It sold out almost instantly at $125/person. Most of the chefs were local, so expenses were minimal. (For the two chefs who weren’t local, the club covered their costs.)

The Payoff: Druid Hill members were treated to a very special dinner and offered a peek at their chef’s culinary upbringing. The guest chefs were able to reconnect with colleagues to network, learn new techniques and demonstrate how far they’ve evolved. 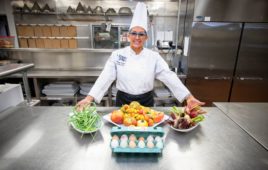