COVID-fueled supply chain interruptions have been causing headaches for chefs, not only because of dealing with unpredictable ingredient availability, but also keeping costs and waste under control. Club chefs share how they are handling these obstacles while maintaining the first-class service their members expect.

Last November, Blair Cannon, Executive Chef at Forsyth Country Club in Winston Salem, N.C., initiated a basic training program for his back-of-the-house staff and members to drive home the need for flexibility and most effective use of resources during the supply-chain crisis. For the cooks and chefs, the program focused on cost control, eliminating waste and strategic planning.

“We made the cost-control portion of the training into a sort of game, bringing out five different items for which we asked them to guess the price,” Cannon explained. With prices rising almost every day, there were more than a few surprises, driving home the need for optimal use of ingredients from various proteins to a quart of heavy cream. Staff members also keep waste logs to keep them cognizant of how much food they are throwing away and encourage them to reduce that amount.

While Cannon cannot avoid raising prices on certain items that have soared in cost, he introduces the new prices slowly over time.

“We don’t want to cause our members sticker shock by increasing the prices all at once,” he said.

Some members want their prime New York strip steaks even if the price is higher, but Cannon provides other, more flexible members with weekly specials he calls “Butcher Block” for meat and “Off the Hook” for fish. Both feature proteins that cost less, such as Wagyu Teres Major or baseball cut sirloin, but have a perceived high value.

Showcasing available desserts on a traveling cart gives them an air of elegance and encourages impulse ordering. Cannon also highlights a Pie of the Week and Cake of the Week.

“We sell our desserts at lower prices than our competition, but, for us, they have done a good job increasing check averages at a time when overall food costs are so high,” he said.

To help supplement income lost from cancelled events, Cannon creates family take-out dinners from the ingredients he has on hand. The specific weekly offering, whether it is a soup, casserole, lasagna, enchiladas or a multi-course Chinese dinner, is announced on Mondays and can be picked up hot or cold with heating instructions.

“Because we have the ingredients in house, we can offer these family dinners at a good price and still have a good profit margin,” he noted.

Banquet menus have also been affected by the supply chain issues at Forsyth. Instead of offering three different entrée choices, members can choose from two proteins, accompanied by the same sides.

Cannon also keeps the banquet manager apprised of what will be on the menu the week of a pending event so she can promote those dishes for the event and minimize the need to bring in extra products. With fluctuating prices, certain products such as crab and oysters are offered at market prices to keep profit margins healthy.

For banquets, total guest count is now required one week in advance to control ingredients that need to be purchased and give the club an opportunity to supplement with other purveyors if necessary. Prior to the pandemic, guest count was required 72 hours prior to an event.

Instead of relying on one large purveyor for ingredients, Cannon does business with several now. In addition to providing access to a wider range of products, this has generated pricing competition. “I was able to save $8 a case on heavy cream,” he points out.

During the supply chain uncertainties, Luke Livingston, Executive Chef at Indian Creek Country Club in Indian Creek Village, Fla., cross-utilizes product as much as possible. If, for example, there are some specials on the a la carte menu that do not sell one night, he will use a part of the dish as the foundation for another meal. Recently, for example, he transformed some crab cakes from a previous night’s menu into filet Oscar, comprised of a six-ounce steak, two ounces of the crab cake, Bearnaise sauce and asparagus.

To ensure that he has the necessary ingredients on hand for his weekly menus, he announces his specials for the week on Sundays.

“I’ve been burned a few times by committing to certain dishes a week or so in advance and then having to change them,” he explained. “This way, we can use the best ingredients available at any given time.”

Livingston emphasized that in this environment chefs have to be open minded and ready to turn on a dime.

“Instead of an extensive description of an item, such as an Idaho potato, on the menu we’ll just say potato,” he explained. “That way, if I can’t get Idaho potatoes I can substitute Yukon Gold, fingerlings or even a sweet potato.”

Sometimes the substitution can be a little more challenging and frustrating. For a recent wedding, Livingston received a short shipment of little gem lettuce for a deconstructed Caesar salad. To make up for the lack of this key ingredient, he peeled down regular romaine.

“It took more work, but the couple got the salad they had ordered,” he said.

To avoid disappointing a member who may be salivating for a ribeye steak that the club may not have, Livingston keeps the front desk apprised of what will be available on any given night.

“This way, members can call and ask what’s on the menu that evening,” Livingston says.

The unavailable item that gives Livingston the biggest problem is a shortage of dish washing machine chemicals.

“I can’t recreate the chemicals needed to run the machines,” he says. Jon Tice, Executive Chef at Stone Eagle Golf Club in Palm Desert, Calif., is having more trouble getting to-go boxes and other dry goods than he has getting ingredients, so he stocks up on paper products when he can find them. Labor is also one of his biggest issues.

Like all club chefs working with supply chain challenges, Tice changes his menu frequently, but has found that instead of being put out, members have embraced the element of surprise. E-mail blasts featuring the day’s menu give them a preview of what new dishes they will find.

“Our members are excited to see the menus change more often and they are eager to try the new dishes,” he explains. “Some price rises on standard menu items elicit some sticker shock, but they shop at the supermarket and are aware of the spike in ingredient costs.” 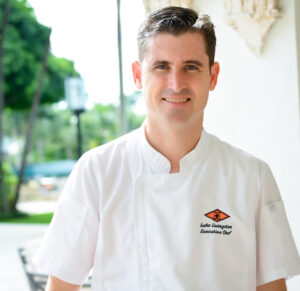 “With a country-wide shortage of cream cheese during the holiday season and our chef needing every ounce of cream cheese we had in house for the frosting of a carrot cake for a 250-person wedding, we reimagined the classic pimiento cheese recipe,” Livingston says. “Instead of cream cheese, we gave our version a Mediterranean flavor profile by using Greek yogurt and feta and mozzarella cheeses.

Certain crackers that are the favorite accompaniment to the cheese have also been difficult to obtain, so Livingston came up with a recipe for a homemade rice cracker.

“A bonus is our cracker is a healthier alternative to the commercially produced kind,” he noted. “It is also gluten free.”

Members at Stone Eagle Golf Club in Palm Desert, Calif., enjoy upscale menu options such as veal chops, according to Jon Tice, the club’s Executive Chef. But when veal is not available, Tice transforms a less expensive protein chop into a high-end dish. On a recent menu was a cider brined Kurobuta pork chop with apples, charred onions, thyme, whole grain mustard and an apple demi-glace.

“It’s all about creativity,” Tice noted. “Members appreciate and respond to that.” PROCEDURE:
1.  Pre-heat oven to 200.
2. Rinse rice in a strainer until water runs clear; drain well. Combine with four cups of water in a saucepan. Bring to a boil; reduce heat to low, cover and cook until rice is tender and water is absorbed. Remove from heat and let cool.
3.  In food processor, puree rice until it is a paste-like consistency.
4.  On a baking sheet with a Silpad, spread a thin layer of the rice mixture. Place baking sheet in the oven for two hours.
5.  Heat oil in a saucepot to medium/high heat.
6.  Break pieces of the dehydrated rice mixture into the oil. Rice mixture will puff up and get golden brown.
7. Remove from oil and place on a paper towel to drain off excess oil.
8.  Season with smoked paprika and salt. PROCEDURE:
1.  Pre-heat oven to 450 degrees F.
2.  Scrub and wash the potatoes and cut each into 8 equal wedges, lengthwise. Place into a bowl and season with salt, pepper and oil. Toss until coated and put on a sheet tray lined with parchment paper. Bake until tender throughout, about 10-15 minutes. Set aside.
3.  Pull the pork chops out of the brine and pat dry with a paper towel. Place on a seasoning rack. Reduce the 2 cups of apple cider, with two sprigs of thyme, to 1/2 cup.  Strain the cider into the demi-glace in a small sauce pot and add the mustard. Set aside for the moment.
4.  Cut the onion into eighths, leaving the root side trimmed, but still intact. Season the onion wedges with salt and pepper and put into a hot pan, on the cut side, with a few tablespoons of oil. Cook on medium heat for about 7-10 minutes or until the sides of the onion are almost burnt. When one side is done, flip the onion to the other side and repeat. Set aside.
5.  Peel the apples and cut the core and seeds out. Cut each apple into 6-8 uniform pieces. Set aside.
6.  Heat a cast iron pan on medium high heat, add a few tablespoons of the grapeseed oil. Season the chop with salt and pepper and carefully place in the cast iron pan and sear on one side until a nice crust develops, about 3-5 minutes. Flip the chop over. Add 4 tablespoons of the butter and thyme. Baste the chops with the hot butter and thyme until the internal temperature reaches 150⁰F. Set aside and dump the butter and oil from the pan.
7.  Heat the sauce back up and once warm, slowly add the cold butter while constantly whisking to emulsify the butter into the rest of the sauce, check for seasoning.
8.  Place the potatoes back into the oven to crisp up, about 5 minutes, check the seasoning.
9.  Place remaining tablespoon of butter in the cast iron pan and lightly sauté the apples and onions with a few sprigs of thyme until just warmed through.
10. Place four pieces of potato in the center of the plate, next add the pork on top of that, followed by the apples and onions and finish with the sauce.

> Have staff members keep waste logs to keep them cognizant of how much food they are throwing away and encourage them to reduce that amount.
> Provide alternatives to higher-costing proteins on the menu with ones that cost less, but have a perceived high value.
> Expand your list of purveyors for ingredients. In addition to providing access to a wider range of products, this can generate pricing competition.