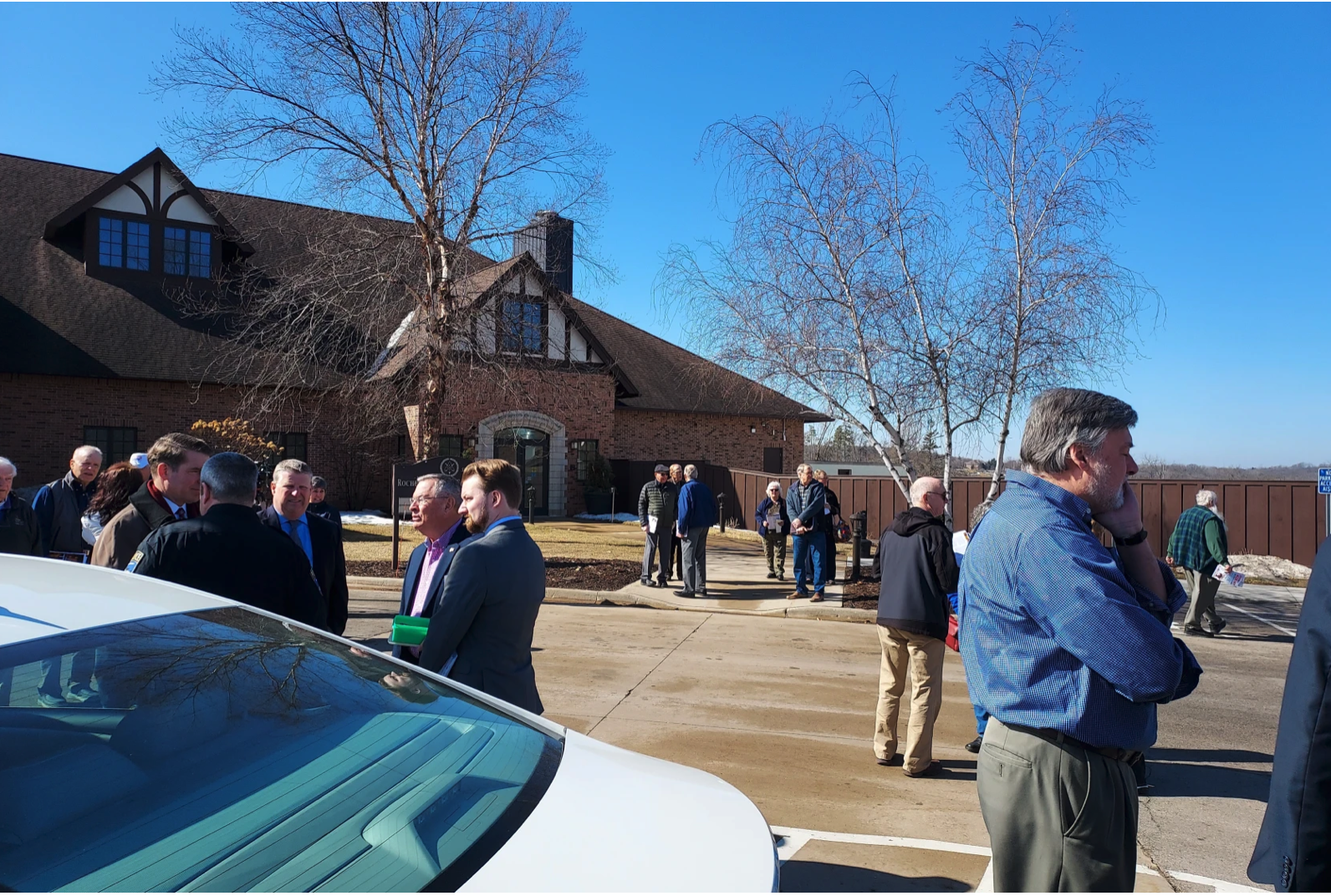 A ticketed event called “Crime Crisis: Rochester” that was scheduled by the Center of the American Experiment, a conservative think tank, to discuss public safety in Rochester, Minn., was canceled by the Rochester Golf & Country Club “because  it generated controversy among Club members,” according to a club statement. “It was determined that it was not in the best interest of the Club membership to hold the event,” the statement added. “RGCC does not endorse any political position.” News reports said club members had organized and circulated petitions denouncing the Center, which tried unsuccessfully to get a temporary restraining order against the club’s decision, saying it would “suffer irreparable and severe damage” to its reputation and “incalculable future loss of fundraising opportunities” if the event was not held.

A ticketed event called “Crime Crisis: Rochester” that was scheduled to discuss public safety in Rochester, Minn. with local law enforcement leaders and a conservative think tank was canceled on the morning of March 15th, the Post Bulletin of Rochester reported, after event organizers say the Rochester Golf & Country Club (RGCC) terminated the contract to rent space where it would be held.

“Unfortunately, we’ve been canceled,” Bill Walsh, Communications Director for the Center of the American Experiment (CAE) said as he stood outside the event entrance in the minutes before the scheduled event was to begin, the Post Bulletin reported.

In the days before the event, some community members raised concerns about the organization hosting the event, the Post Bulletin reported.

A Change.org petition cited the Center of the American Experience’s past events and the repercussions of those events as a reason for concern, the Post Bulletin reported. Past events included topics such as “Exploring Education Options in Rochester” and “Raise our Standards Tour.”

“Following the most recent June event, the Rochester Public School Board was met with literal chaos directly resulting from the rhetoric and action encouraged among participants of the CAE luncheon at RGCC,” the petition stated, according to the Post Bulletin’s report. “Attendees of this meeting were implored to take action at the local level and to run for public school board positions, while CAE continues to publicly encourage and celebrates disenrollment and defunding of public schools.”

Med City Beat, which describes itself as “an independent news service covering government, business, health, education, and culture in Rochester, Minnesota,” reported that RGCC members were among those organizing and circulating the petition.

A statement about the cancellation was issued by the club on the afternoon of the 15th, the Post Bulletin reported.

“On Sunday, March 13, 2022, Rochester Golf and Country Club notified The Center of the American Experiment of the upcoming event cancellation,” the statement read. “RGCC chose not to host the CAE’s event because it generated controversy among Club members. It was determined that it was not in the best interest of the Club membership to hold the event. RGCC does not endorse any political position.”

Receiving a call just after 11:30 a.m. on the morning of the 15th, Walsh said there would be no action on the group’s request earlier that morning for a temporary restraining order against the club’s decision to cancel so the event could go on as planned, the Post Bulletin reported.

An affidavit in support of a temporary restraining order/injunction filed by the CAE argued that if the event was not allowed to go forward as planned, the organization would “suffer irreparable and severe damage” to its reputation and “therefore incalculable future loss of fundraising opportunities” that the nonprofit organization relies on, the Post Bulletin reported.

The motion was denied by Judge Lisa Hayne just after 8:35 a.m. on the 15th, the Post Bulletin reported. A judicial comment was included in the determination that read “Plaintiffs do not have the right to a hearing without proper filing of suit and motions.”

Station KIMT of Rochester reported that the CAE has said there is a lawsuit now in place for breach of contract with the county club. KIMT’s report can be viewed at https://www.kimt.com/news/olmsted-county/rochester-golf-and-country-club-faces-lawsuit-after-canceling-crime-crisis-event/article_fac8bad4-a4b0-11ec-a7cb-ab016cab0ab3.html

About 50 people were registered to attend the event at the club, the Post Bulletin reported. A court filing on March 14th stated there were 44 paid and registered attendees.

The Post Bulletin reported that those who could be seen milling about the club’s parking lot, waiting for the event to begin and apparently unaware of the cancellation, included Rochester Police Chief Jim Franklin and Olmsted County (Minn.) Sheriff Kevin Torgerson.

“The issue of crime [and] punishment, what’s going on here in Rochester and Olmsted County, we wanted to feature [and] focus on that,” Walsh told the Post Bulletin. “There is some good cooperation going on. That’s what people would have heard today if we had been able to go through with the event.”

Police Chief Franklin said in a statement that he was disappointed that he had not been given the opportunity to “provide local law enforcement perspective regarding public safety issues affecting our community and our response to those issues,” the Post Bulletin reported.

“Organizations frequently invite me to participate in conversations about public safety,” Franklin said in the statement. “I see these conversations as valuable opportunities to engage with community members and showcase the work [the Rochester Police Department] is doing within the community. I was looking forward to today’s discussion on how together we could continue to build community trust and safe neighborhoods.”

Former state representative and Rochester resident Fran Bradley told the Post Bulletinthat the event was never to focus on how crime was rampant in the city, but rather to highlight the partnerships the police department and sheriff’s office have created.

Walsh told the Post Bulletin that the group would reschedule the event and return to Rochester.