Being unprepared for what can go wrong with “ordinary” club activities can be just as disastrous as an infectious outbreak or a suddenly overloaded golf course or dining room.

There’s no disputing that club managers and their staffs have more than distinguished themselves with how they’ve responded over the past year and a half to the challenges first posed by an unforeseen and unprecedented health crisis, followed by a surge to activity levels and membership populations that haven’t been experienced for over a decade.

While those special and extraordinary efforts have been well-documented and will continue to earn their rightful place in the spotlight, the challenges that can be part of the “usual” club business can’t ever be ignored, either. These can pop up at a moment’s notice within any organization where daily activity revolves around the behavior and lifestyles of a few hundred or more people—and being unprepared to handle them can be just as disastrous for a club as an infectious outbreak or a suddenly overloaded golf course or dining room.

Here are some examples that caught our eye just over the past few weeks. We’re not going to name the clubs or managers that were involved, because these really could have happened just about anywhere. And take note, all of these were picked up from general media reports, which means the clubs involved couldn’t keep these situations from becoming public knowledge and were all contacted for comment—and some did better than others with how they stood up and responded to what happened.

If nothing else, these all might be good to include for “What would we do if?” discussions at a staff retreat, or as part of “real life” training exercises:

— A photo of women who wore shirts that read “Drunk Wives Matter” when they played as a foursome in a club tournament was shared long enough on that club’s Instagram platform to set off a firestorm of public criticism. The club quickly issued a statement condemning the photo, and post, as “thoughtless,” and said it would “take full responsibility for this mistake and use this opportunity to reflect on our actions.” Separately, the club’s General Manager admitted to “a massive lapse of judgment by everyone involved” and said mandatory gender bias, diversity and equity training would be instituted for all employees, current and future. One of the women in the photo also issued an apology, but demands were still made for the club to do more, both internally and for the community. “When you post something on social media and share it, that’s reflective of the brand and the club,” said one critic.

— Two examples of how political divisiveness can cause turmoil within a club got public attention, both after word got out about club functions that were being arranged to celebrate and/or raise funds for controversial figures and viewpoints. In one case it led to protesters gathering outside the property and a major vendor pulling its merchandise from the property’s retail store.

— After a 68-year-old man suffered a heart attack while playing golf, a television station reported that his companions called 911 and were told to see if the course had a defibrillator. But after running to the clubhouse, they were told one wasn’t on site. The man then died before paramedics could arrive. When the station contacted the course for comment, it reported that “management didn’t agree to an interview, but said it was considering getting a defibrillator, but no decision had been made.”

—Other items we came across—again, these were all seen in the space of a few weeks—contained the usual helping of reports about course vandalism, pro shop and parking lot theft, staff embezzlement, and complaints from surrounding residents about noise, lights and errant golf balls.

It all adds up to a sobering reminder that while dealing with the extraordinary may still occupy a lot of our current attention, the need to stay diligent about what can go wrong with “ordinary” club activities will never go away. Building A Successful Junior Program at Your Club 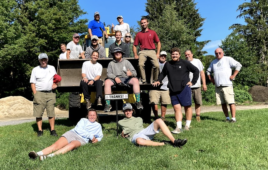 Hiring Challenges Add to the Need to Maintain a Happy Crew