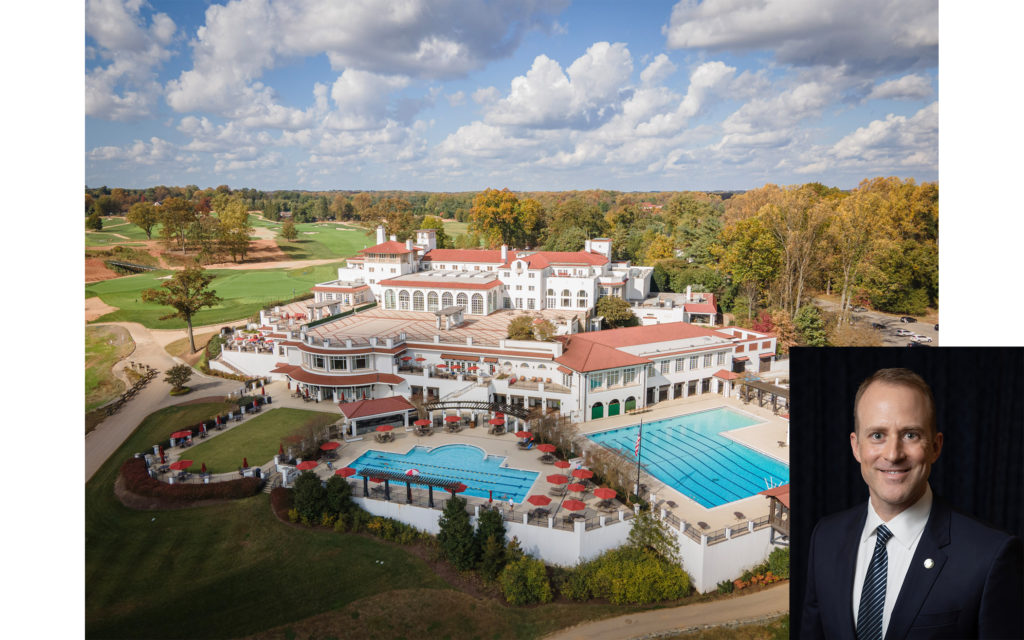 Long before it was popularized in movies and at drive-thru windows, “pay it forward” was established as an integral part of the club management profession, through the industry’s strong emphasis on the value of professional networks and the importance of mentoring relationships. And a textbook model for how well networking and mentoring can be used to develop talent and foster exceptional performance can be found in the career arc of Kris Glaubitz, CCM, the Food and Beverage Director of Congressional Country Club (CCC) in Bethesda, Md., and the 2020 recipient of “Rising Star” honors through the Excellence in Club Management Awards.

Like many, Glaubitz’s first exposure to the club business came when he was only focused on an immediate, short-term need: finding a part-time job while in college. But after working at a ClubCorp property as he finished his degree in Business Management at Texas State University, Glaubitz—also like many—didn’t immediately think of considering clubs as an option for full-time employment.

“Following my graduation, I did not know you could make clubs a career,” he says. “So I got a ‘real’ job where you don’t have to work nights, weekends and holidays—but I soon realized that I was not going to be fulfilled in that environment.” Congressional CC’s F&B team came up with inventive ways to remain connected with and provide services for the club’s membership under pandemic-imposed restrictions, including finding new, safe venues on the property for weddings and other events, and converting a poolside pavilion into a popular cafe concept.

Glaubitz’s work as a banquet server while in college, though, had made a lasting impression on Tony Mowles, the Banquet Manager who had hired him for that job and then advanced in his own career to become a General Manager at Wildflower Country Club in Temple, Texas. Mowles gave Glaubitz an opportunity to come back into clubs as Wildflower’s Service Director, and that started him on a career path that eventually led to a referral, by Mowles, to another General Manager, David Gardner, who hired Glaubitz to be Clubhouse Manager of Ridgewood Country Club in Waco, Texas. Gardner also helped Glaubitz get involved with the Club Management Association of America and start successful pursuit of his CCM certification, all of which further cemented his immersion in the industry and commitment to the profession.

As Glaubitz continued to progress in his career, becoming an Assistant General Manager at Ridgewood and then Assistant Clubhouse Manager at Houston Country Club, his involvement with industry organizations also led to his being matched up through a formal mentoring assignment in 2013 with Jeffrey Kreafle, then the General Manager/Chief Operating Officer of Bellerive Country Club in St. Louis, Mo. Kris Glaubitz and Jeffrey Kreafle, Congressional CC’s Chief Executive Officer, began a mentoring relationship in 2013, when both worked for different clubs, that then brought them together at CCC in 2019. “Jeffrey has influenced me to learn and achieve more of my personal and professional goals in a short time than I thought possible,” says Glaubitz. “He challenges you to think that ‘If your dreams don’t scare you, then they are too small.’ ”

That relationship, and the counsel that Kreafle provided through it, then proved especially valuable as Glaubitz took a GM/COO position of his own with Oak Hills Country Club in San Antonio, Texas, where he helped to direct major golf course and clubhouse renovation projects. With those successes under his belt, Glaubitz then set his sights on finding “new challenges of a larger size and scale”—and as it would turn out, Kreafle was now Chief Executive Officer of Congressional, where 3,500 members, a 100,000-sq. ft. clubhouse, a $13.5 million food-and-beverage operation and 4,000 member events a year could certainly meet that standard.

Adding to all that its operation involves on a daily basis, Congressional was also five years away from its centennial in 2024 when Glaubitz arrived in 2019, and had signed a landmark agreement the previous year to host eight PGA championship events, including the PGA Championship in 2031 and the Ryder Cup in 2036. And to prepare for that stretch, an extensive renovation/restoration of Congressional’s Blue Course that Kreafle calls “unparalled in scale” and “transformational in scope” was also set to begin.

Glaubitz plunged right in to work with his new team at CCC and lead the development of some exciting and progressive new concepts for all that was on the club’s long-range horizon. For the upcoming 100th anniversary, a Centennial Wine Bottle Program was created, securing a commitment from a top winery to issue an exclusive new premium, CCC-logoed vintage in each of the four years leading up to 2024, with a limited amount released for consumption in the club’s dining rooms and the remainder set aside to become a four-bottle collector’s edition.

As these and other projects were being planned, however, another concern suddenly arose: how to get Congressional through 2020. With the club shut down completely for seven weeks, the priority became how to remain connected with CCC’s vast membership.

“Our challenge is always to find ways to make Congressional feel small and personalized,” says Kreafle. “In the midst of the pandemic, Kris took ownership of how he and his team could move quickly to adapt their operation and produce a safe environment, while also providing as much service to our members as possible.” Some of the effective solutions that were implemented included:
• Turning what had been CCC’s seasonal poolside pavilion into a cafe concept with proper distancing and other safety precautions, along with full capabilities for to-go orders. Food menus were expanded to include more breakfast and lunch options, and beverage service was extended to offer a barista-style coffee bar, a full bar for alcoholic drinks, and retail sales.

“We never imagined having our summer pavilion open throughout the year, but it was exciting to see members enjoy it, even in heavy winter jackets,” Glaubitz says. “We’ve come to realize that post-pandemic, this type of operation may still be very much desired.”

(During the holidays, the cafe also became a pop-up shop where over 180 different items were sold as part of an Eat, Drink and Be Merry Unique Boutique.)

• While many of the weddings scheduled to be held at CCC during 2020 were postponed, the staff found unique ways to accommodate those who didn’t want to wait, including using the newly completed 16th green on the Blue Course as an especially attractive ceremony site, with an historic chapel located just outside of the CCC property serving as a unique backdrop. It marked the first time any of CCC’s golf courses had been used for weddings, and may be another idea carried forward.

Through it all, Glaubitz has found new fulfillment in how he and his team responded. “It reinforced the importance of the role that every team member plays in achieving excellence,” he says. “And confirmed for me that I want to continue to invest in others, the way others have invested in me.”