St. Davids Golf Club, on the “Main Line” west of Philadelphia in Wayne, Pa., opened for golf in 1897. As is the case for any club over a century old, St. Davids has gone through many changes over the years. Most notably, its golf course was redesigned by renowned architect Donald Ross in 1925.

St. Davids, with a property that is adjacent to the prestigious Valley Forge Military Academy (where the 1981 movie “Taps,” starring George C. Scott and Timothy Hutton, was filmed), has had several clubhouses over the years. Its newest one was finished in 2006, successfully reflecting the goal of capturing the farmhouse appearance and informal nature of past buildings while adding the features that a modern club operation needs. The club didn’t know it at the time, but shortly after it opened its new clubhouse, it also added its future head chef. John Zeggert joined St. Davids as a line cook in 2007 and, after leaving to work for the Arizona Golf Resort and Convention Center, came back in 2011 to become the club’s Executive Chef.

We appreciate Chef Zeggert taking the time to talk to us about how he and his culinary style are perfect for this great old Philadelphia Main Line golf club—and how he’s brought new traditions there through his special artistic talents.

Q. Chef, you have been a world-champion pumpkin carver, an award-winning cake sculptor, and have had paintings on display at one of the largest malls in the country. How do these artistic talents help you look at food?

A. I see food in shapes and colors, and use the natural progression of the seasons to decide what my plates and presentations look like.

For example, when I wrote our weekend specials for the early days of August, I knew that watermelon, heirloom tomatoes, corn, pea tendrils, sour pomegranate and scallops were all in their prime—and, because they would all be coming from a state or two away at most, would taste amazing together, as long as I, as the chef, knew when to stop messing with them.

Don’t forget that as much as color and aesthetic are important in a painting, as chefs we’re blessed with other senses to apply to our canvases. Things like texture and scent, when paired with colors, are so strong it allows us to take our patrons on journeys and through memories. The whole point of art is to share or evoke emotion. Chefs, as artists, are given incredible gifts.

Q. Your pumpkin carvings are especially amazing. How did you develop this skill, and how do you showcase it at your club?

A. I started carving pumpkins in elementary school and just never stopped. My grandmother had a long, winding driveway I would line with carved pumpkins. She would let me take the day off from school and carve around 20 of them.

I’m sure I wasn’t the first to try a multi-layer technique with a pumpkin, but I’d never heard of it before and started doing that in high school, carving different layers and using a bright light source to reveal all the details.

The average pumpkin I do takes about five hours, and if it’s a ‘custom carve’—someone wanting a family portrait, or a specific scene from a movie, for example—the whole process can take upwards of 20 to 30 hours. Chef Zeggert brings a special Halloween spirit to St. Davids GC with multi-layered pumpkin carvings that are back-lit by Christmas lights (view more in the online version of this article at www.clubandresort
business.com).

I use a pushpin to transfer the design, an antique ice-cream scoop to level out the section to be carved, and a series of modified plastic-handled saws and a couple of wood-carving tools. It’s possible to use carbon paper to transfer the more basic patterns.

There’s also a method of carving, using a Dremel tool, that creates very clean lines. The designs can be found on the Internet, or designed yourself either by hand or with a variety of computer programs.

For the club, I usually do one per weekend through October, and a few less detailed ones to be shown through the clubhouse on Halloween weekend. It’s really not a difficult hobby or something you have to take classes in. It’s a learned skill that’s more of a question of patience and tolerance for tedium. The best way to learn is to just do it over and over. I can’t begin to tell you how many pumpkins I’ve been halfway through, only to connect two wrong lines and have the entire thing collapse. 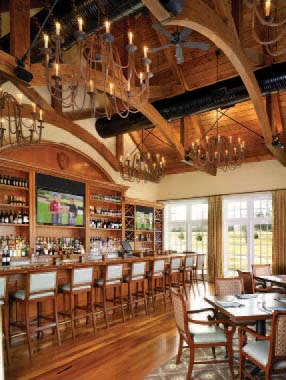 For me, the best part of the process is walking into a room with a pumpkin wrapped in plastic and a cord hanging out of the bottom. Without the light in it (I use a green string of 100 clear Christmas lights), nobody ever has any idea what the finished product looks like. But as soon as I plug it in, the crowd of people waiting always make me smile. That final “reveal” makes the 5 to 12 hours of carving all worth it.

Q. Chef, at one point you were a garde-manger specialist—one of the most demanding kitchen stations that is often taken for granted. What tips can you share on how club chefs should hone their skills in this area?

A. I’m a great fan of the cold kitchen, and it seems to be a bit of a dying art. It’s not common, even in a club filled with “foodies” like St. Davids, to sell terrines, gelees or pates.

For the Pomegranate Gastrique:

You’re absolutely right—gardemanger work is under-appreciated and often forgotten about. It doesn’t have the “flashy” moments like the fire and drama of the hot line, so it’s never focused on by the modern TV shows. Therefore a lot of young culinarians almost shun the station.

The best garde-mangers are often a bit difficult to deal with. They’re almost Prussian in their order and mise; everything has to be “just so.” But if you’re lucky enough to find someone like that, you should do everything you can to nurture them.

Start with the cold-kitchen classics. Like mathematics, they’re the foundation for all the fun stuff that comes later. Embrace molecular gastronomy, but in a way that can enhance the consumer’s experience. Don’t be afraid of things like agaragar and xanthan gum. The cold side has so many amazing possibilities that were only recently discovered within the last decade or two.

For an extended version of this
conversation with Chef John Zeggert and his recipe for Harvest Scallop (shown) go to
clubandresortbusiness.com

Q. Chef, you’ve worked your way up in the club industry from starting as a line cook to now being an Executive Chef. What characteristics do you possess that helped this come to fruition? And has your own success caused you to look at the development of young talent differently than most chefs?

A. I don’t feel I possess different characteristics than any other driven chef. Luckily for me, Michael Butler, the General Manager here at St. Davids, saw a passion and creativity in my performance with every step up I took, and remembered it when the time was right. He and I began building a mutual respect for each other years ago, when he got behind the line and worked next to me on a busy Friday night, just to provide the extra set of hands that I needed. That kind of management sets a fantastic standard.

I think you need to do the very best in every aspect of whatever it is you do, both in and out of the kitchen. If you’re a line cook, you should be making a conscious effort to lessen the steps you take to produce a dish, while at the same time finding ways to improve your station setup: mise layout, perfect prep, mindful systems, etc. If you’re the Sous, you need to realize that your job, day in and day out, is to make the Executive Chef look his best at everything he does, and be mindful of the costs to maintain his operation. You need to apply everything you’ve learned, from fixing the dishwasher in the middle of a dinner shift, to making sure he got the last drop of demi off the side of the plate for his tasting menu.

As for developing young talent, I intentionally look for young culinarians who have a passion for the industry, an eagerness to learn, and the willingness to be humble. If you find someone with those characteristics, and an overall good attitude, everything else can be learned.

Q. One of the biggest challenges facing a club chef on a nightly basis is the a la carte frenzy that occurs when members having cocktails see others sitting and ordering, and follow suit. This can affect food quality and service, no matter what precautions are taken. What do you do at St. Davids to handle this effectively?

A. This is inevitable; it’s happened in every private club I’ve ever worked in. I’ve always noticed a frenzy coming from the front of the house that’s almost like a constant panic-mode. Here at St. Davids, I’ve tried to instill a mentality that we, as kitchen staff, not only need to be the physical middle of the clubhouse, but the calm center as well. The staff working as hard as they can to deal with the onslaught on the other side of the doors needs to know, even if they don’t see it, that on my side everything is calm, controlled, and managed within reasonable silence and laughter. Smiling is something a kitchen, even at its most hectic, needs to do.

You, as a chef, can ask the frontof- house staff to explain to the membership or patrons that the food might take some time this evening, perhaps offering a complimentary glass of wine. Or, you can ask that they hold off the 10-top for half an hour, to make everything go more smoothly for everyone.

But in the long run, I feel that controlling the pace of the kitchen yourself— calmly communicating through the evening, and smiling along the way—will make a huge impact on the clubhouse in general.

Jerry Schreck: is a member of the Club & Resort Business Advisory Board. Know someone you’d like to have Jerry interview for a future “Chef to Chef” conversation? Send your suggestions to [email protected]