Club and resort properties are encouraging year-round use of facilities by offering winter-focused recreational options.

Rather than battening down the hatches and going dormant as soon as temperatures drop and snow begins to fall, club and resort properties are recognizing that offering winter recreational options can keep them at the front of members’ and guests’ minds well into shoulder seasons, and even year-round.

At Glens Falls Country Club in Queensbury, N.Y., a seasonal membership that was put into place eight years ago to accommodate the club’s popular paddle-tennis amenity begins in November and extends through April. “It’s for the folks who do stay here in the winter months and might not use the facility much during the summer,” says Clubhouse Manager Benn Hart. Glens Falls CC’s popular paddle-tennis amenity has spurred the club to create a seasonal membership, which Clubhouse Manager Benn Hart says is often (mistakenly) referred to as “the paddle-tennis membership.”

About 100 members participate in Glens Falls’ paddle-tennis program, with the club offering socials on Friday evenings, men’s and women’s leagues, tournaments with other area clubs, and regular daily play. A warming hut offers members respite from the cold as they relax between games.

Paddle tennis is also part of Frost Fest, an annual event at Glens Falls that features outdoor games for kids and adults, a snowman-building contest, open sledding and a guided cross-country skiing tour of the property, plus ice hockey.

In fact, Hart says, a handful of Glens Falls members who are former National Hockey League players are planning a pro-am scrimmage for the 2017 Frost Fest. The former pros even handle maintenance for the property’s Round Pond, where the game is played, shoveling it as needed and flooding the ice to even out the surface. When it’s cold enough, the same pond is used for ice skating and ice fishing. 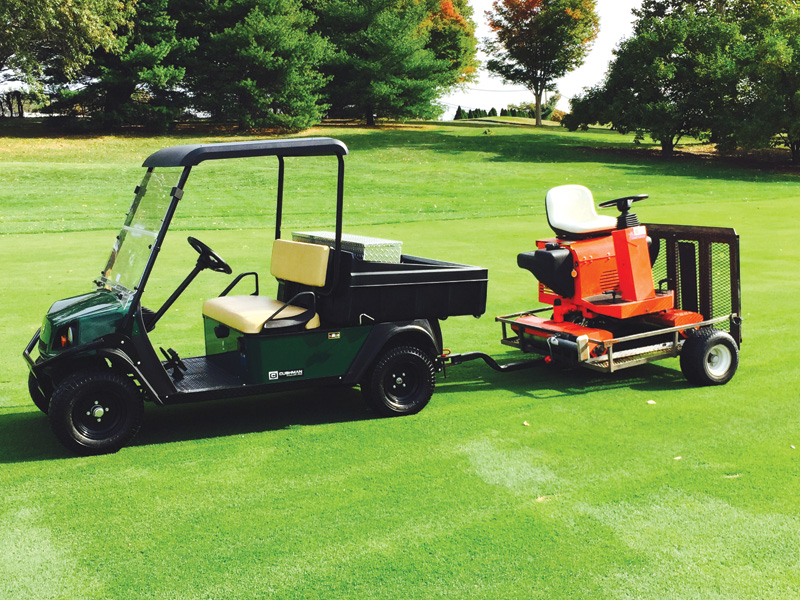 To ensure that only members are using the cross-country ski trails on its golf course, Glens Falls CC issues trail passes featuring different colors each year.

Must Love Snow
Glens Falls’ cross-country skiing trails run through the golf course, and members receive colorful ski passes to attach to their jackets, so staff can identify them from nonmembers (all amenities are only available to members). Those with access are also given a map of the trails, which are open on a daily basis, even if the clubhouse is closed (which is the case Monday through Wednesday from January to March). Members are also invited to bring their own equipment.

At Breezy Point (Minn.) Resort, all winter-recreation amenities are open to the public, from the property’s restaurants to the snowmobile runs. The winter season typically begins in November, but is running at full speed around Christmas, when guests are on-site for vacation. “If we have ice and snow by then, we get going,” says General Manager Dave Gravdahl.

Though the amenities are open seven days a week, Gravdahl says most of the activity comes on weekends. The only winter amenities that have fees associated with them are dog sledding, use of the indoor ice rink and horse-drawn sleigh rides (though these are free for those staying overnight at the resort); all other amenities, including skiing trails, outdoor ice rinks and ice skating (the resort can have up to four outdoor ice rinks) are available for free to the public. There are fees for equipment rentals, Gravdahl adds.

Breezy Point offers five kilometers of cross-country skiing trails on its Whitebirch Course, with the trails groomed before every weekend. For guests who miss playing golf in the dead of winter, the facility sets up six holes on one of its frozen outdoor ponds by plowing or packing down the snow and lining the “fairways” with used and discarded Christmas trees. Guests play with tennis balls rather than traditional golf balls, using one club for the entire round (with no charge for equipment or the game, Gravdahl says). A city-wide celebration known as Ice Fest includes activities at Breezy Point Resort during the first weekend after New Year’s, concluding with a fireworks show on the ice that is “spectacular,” Gravdahl says.

Glens Falls CC also allows snowshoeing throughout its property (even on the pond) and welcomes members for sledding on holes 1 and 17, which feature “nice steep pitches,” Hart says. Staff help direct people to sledding areas, which are monitored by management.

Of course, properties are still subject to the whims of Mother Nature in the winter, making some activities challenging when she’s stingy with snow. Frost Fest, Glens Falls CC’s annual winter event, was scheduled for the second week of February earlier this year, but with temperatures in the 50s, many of the daytime activities—particularly those on ice—were nixed. Atkinson Resort & CC sees as many as 300 cross-country skiers per season and also allows snowshoeing, as long as trekkers stay parallel to the groomed ski trails.

The winter season at Atkinson (N.H.) Resort & Country Club is dictated by weather, opening when there is enough snow on the ground to groom and closing when there isn’t. The season has opened as early as January 1 and ended as late as early April, says Marketing Coordinator Andrew Guay.

Atkinson Resort’s cross-country skiing and snowshoe trails are open to the public daily, and turf maintenance/grounds crews groom the trails by pulling a weighted sled behind a snowmobile. Other than the golf-course signage (large, engraved granite posts) and a trail map that the property provides, there are no trail markers.

The property sees as many as 300 skiers per season, Guay says, charging $8 on weekends and $5 on weekdays, with skis, boots and poles available to rent. Atkinson Resort also allows snowshoeing, requesting that guests stay parallel to the groomed cross-country trails. The facility markets its offerings via social media and e-mail, to remind guests to take advantage when heavy snowfall arrives. To keep members aware of what the club offers (and if any amenities are not available due to weather), Glens Falls CC shares information via newsletters, mass e-mails, social media, and word of mouth. Events like pasta nights, prime rib nights and TGIF parties on the last Friday of each month, with cocktails and hors d’oeuvres, are hosted to entice members to brave the winter weather.

“It can be kind of tough in the winter months to bring people to the club,” says Hart. “But we do what we can to encourage people to come and use the place.”