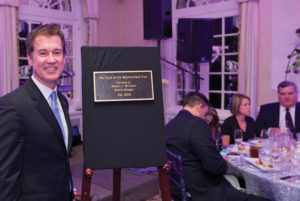 To cap a festive night where he wasn’t allowed to do anything but show up, members of the Westmoreland Club bestowed a new honor on Robert Williams, acknowledging his leadership by permanently dedicating the club’s new outdoor dining porch to him.

Wilkes-Barre, Pa.’s Westmoreland Club has earned the right to be ranked among the best in the business—and for taking it to those heights, General Manager/COO Robert Williams has earned Excellence in Club Management recognition.

Plenty of eye-opening surprises come with the story of the Westmoreland Club in Wilkes-Barre, Pa., and its General Manager/COO, Robert Williams, CCM, CCE.

You can start with how Westmoreland—located in a city that is only the 13th largest in its state (pop. 41,243 as of 2012), and in a region that has been affected by the changing economy as deeply as any—has ascended not only to Five-Star Platinum Club status, but also ranks in the Top 10 of all Platinum city clubs, sharing that glorified air with properties from metropolitan areas more than 100 times larger.

There’s also the way that the Westmoreland Club has continued to enhance its facilities and amenities (see Achievements and Ideas boxes) despite the challenge of operating in a 92-year-old building that suffered serious flood damage in 1972, after Tropical Storm Agnes spilled the banks of the nearby Susquehanna River. The club has also refused to let its limited room for physical growth, caused by its middle-of-the-block location, stand in the way of finding inventive solutions for accommodating larger events and a growing membership, which now stands at over 1,500.

Another surprise comes from the fact that Williams has been in his position—which might have been viewed by many as a “stepping stone” to a more prominent property—for 19 years. Over that time, in addition to guiding the club through $15 million in capital improvements, he has directed a doubling of food-and-beverage revenues (now over $2 million), including an increase in banquet sales of more than 60% over the last ten years. Throughout his time at the club, annual net profits have consistently exceeded budget by at least 20% to as much as 278%, and member surveys have shown strong satisfaction levels with facilities (94%), casual dining (91%), parties (87%) and overall value (83%).

For all of these accomplishments, and more, Williams was judged by his peers as the most deserving winner of the 2013 Mel Rex Award, as part of the Excellence in Club Management Awards co-sponsored by the McMahon Group and Club & Resort Business. And that led to perhaps the most surprising, and impressive, development of all. Williams’ staff and membership was so excited about his recognition that a special Awards Celebration was planned at the club—one for which Williams was told he could have absolutely no involvement. Members formed a special planning committee for the event, the staff organized every detail, and an entire Saturday night was set aside for the sole purpose of using the club to bask in the limelight that Williams, and Westmoreland, had earned.

And what a revelry it was, with nearly 200 members gladly accepting the invitation (at a not-insignificant price) to be part of a night where every staff member was introduced and greeted with standing ovations. Williams himself was presented with a variety of gifts, including a plaque that will now be permanently affixed to the club’s new outdoor dining deck, dedicating it in his honor.

From One Goal to the Next
Looking back, Robert Williams reveals yet another surprise about his Westmoreland story: He can’t believe he made it through his first year in Wilkes-Barre. “I almost fled six times [after arriving],” he says. “I really didn’t have a full grasp of the poor state of the club when I had agreed to come.”

Williams’ background at that time was primarily as a chef, most recently having served for four years as Executive Chef/Culinary Manager for the Commonwealth of Pennsylvania’s Governor’s Mansion in Harrisburg. He had previously had some experience at a golf club, as well as in a high-volume catering and banquet facility, but was by no means well-versed in club management when he came to Westmoreland.

That, however, was not an impediment for what he was asked to do in his new position. “They didn’t want someone from the club world,” he says. “They wanted someone with good food knowledge and who was good with numbers and people, to pursue one primary goal: Make the Westmoreland Club the premier dining destination in the city.”

That was done, he adds, through a simple formula: “Find the right balance between club traditions [the Westmoreland Club has roots dating to 1873] and cutting-edge innovation, recruit the right talent, and keep the quality up in everything.”

Within five years, Williams says, the goal had been reached, and he had “come to love” club management. As he pursued continuing education and became known as an accomplished club manager himself, he caught the attention of other properties—including Platinum Clubs—that sought to lure him away. But what really intrigued Williams was why Westmoreland didn’t merit the same status. “We already met 95% of the criteria,” he says. A Platinum Committee was formed to set a strategy for achieving the remaining 5%.

With Westmoreland, and Williams, now positioned among the elite, new horizons are again in sight. The club would like to enhance its fitness/spa offerings and find a way to provide sleeping rooms as a member amenity and added feature for reciprocity arrangements, and to help attract larger weddings and other events. “We’re comfortable with where we are—but there is always more to do,” says Williams, expressing what is certainly not a surprising attitude.