“Understated elegance” was set as the theme of the Lost Tree Club from when it was conceived in North Palm Beach, Fla., in 1961. The phrase first reflected the vision and personality of Edwin Llwyd Ecclestone Sr., a Canadian-American with a distinguished British heritage who is credited with pioneering the concept of a high-end gated community when he developed Lost Tree from land that was originally equal parts mangrove swamp and shaded, white-beach oceanfront.

Four years after it opened, the property’s identifying theme was further bolstered when the man who came to epitomize “understated elegance” in the golf world, Jack Nicklaus, moved with his wife Barbara and their family to a lot they had purchased in the Lost Tree community. There were only about a dozen existing homes on the property when the Nicklauses moved from Ohio in 1965. But their connection to Lost Tree, as Jack Nicklaus pursued a career distinguished as much by his character as by his on-course accomplishments, helped to quickly put it on the map as one of the nation’s most desirable residential golf communities.

Because of the prominence gained through the Nicklaus connection, Lost Tree’s golf course, originally designed by Mark Mahannah, received attention through the years to help it keep up with the times; Jack Nicklaus himself donated his expertise to direct a $6.5 million course restoration/redesign in 2002.

But the statement made by other club facilities over that period began to show a disconnect with Lost Tree’s heritage and reputation. After a series of additions and remodelings over the years, the clubhouse, along with separate buildings used for a variety of purposes, began to succumb to age and the stress that came from serving a membership that had grown to over 500.

The club reached the point where it was self-insuring structures that had become out-of-code, with outdated technology that could no longer fully accommodate the needs of a multi-generation membership. Operating costs were increasing, and it was becoming more difficult to accommodate simultaneous events within Lost Tree’s clubhouse or elsewhere on its grounds.

As Lost Tree approached its 50th anniversary in 2011, it became clear that a comprehensive upgrade was needed, to create current-day, cost-effective and code-compliant facilities that would retain the visual appeal and charm, and properly restate the distinctive theme, that had been the club’s foundation. 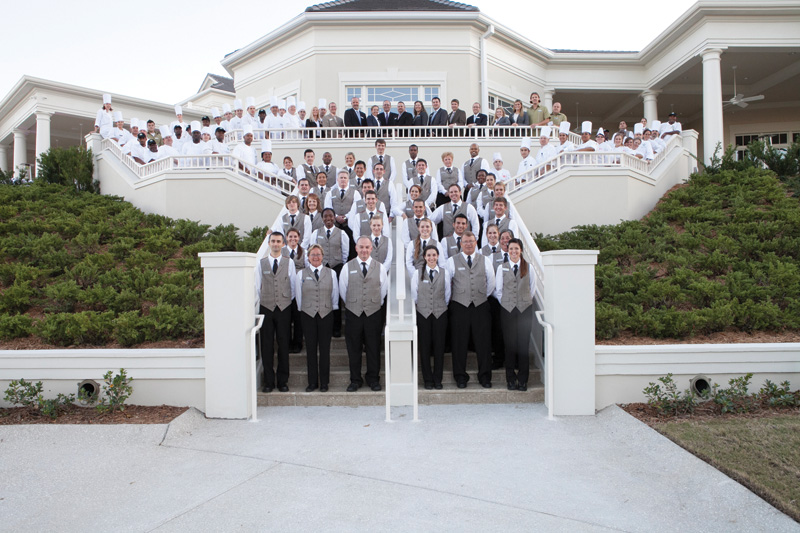 Three Steps to the Future
The first step for this upgrade was taken with the creation of a new $6.5 million Beach House that opened at the start of 2008. The third and final step, a new $5 million, two-level Fitness & Spa Center, was completed this summer.

While those projects created separate new buildings on the property, the biggest piece of Lost Tree’s dramatic facilities renewal, a $21 million clubhouse, brought a much-needed consolidation of buildings and functions scattered inefficiently throughout the property.

The new clubhouse, which opened last fall on schedule and within budget, not only maximized the available space of the existing site by bringing functions (Clubhouse Social, Golf Operations, Locker Rooms, Administrative and Golf Cart Storage) that had been housed in five separate buildings into one new structure, it did so while decreasing the overall footprint on the site from over 31,000 sq. ft to 26,000 sq. ft., which also allowed for the addition of 27 new parking spaces and expansion of the club’s driving range and golf practice facilities.

Even with the reduced footprint, Lost Tree gained significantly more useful square footage in its new clubhouse than in its old one. This was accomplished by raising the main level of the new clubhouse building by six feet, to create a multi-level structure that would maximize the views of the golf course from the spaces that members would use, while concealing back-of-the-house space on the lower (street) level behind a berm, which would also help the clubhouse maintain a more harmonious scale with surrounding homes. The clubhouse now appears to be a one-story manor, set on a hill, from both the arrival entrance and the golf course. To further help it blend in unobtrusively with the neighborhood, it was designed, with proportions, detailing and materials, in an “island classical” theme.

The project architect, Peacock + Lewis, LLC, has made a specialty of elevating Florida structures in this way, to take full advantage of what a site has to offer. A similar “levitating act” was undertaken for the new Beach Club at John’s Island Club in Vero Beach, Fla. (“A Full Day at the Beach,” C&RB, March 2009). Brian Idle, President of Peacock + Lewis, jokes that it’s been suggested to him by a client that his firm adopt Josh Groban’s “You Raise Me Up” as its theme song, because of its success with the approach.

The managers and members of clubs that have seen their main buildings elevated in this fashion certainly sing the praises of the dramatic change it brings about, both in form and functionality. At the Lost Tree Club, the additional six feet made a huge difference in terms of how the golf course could be presented from both within and outside the new clubhouse. “Now you look down into the course, instead of across it,” says Idle.

To take full advantage of the new views, in addition to the panoramic windows that were designed into each main-level dining venue within the clubhouse, adjacent covered outdoor patios, with seating overlooking the golf course, were created off each room. Food-and-beverage service can be seamlessly provided to all of the outdoor areas, with a firepit to warm the patio on the club’s casual side.

“Even in Florida, we’re seeing high demand for outdoor dining and bar service that includes the ambiance of an open flame,” says Idle. “We wanted to do all we could to integrate the indoor and outdoor environments, while recognizing that the two types of areas would require different service approaches. The new Grille Room, for example, was designed with a direct corridor from the kitchen, to serve the patio while bypassing the indoor seating area.”

The inside of the Grille Room has also proved to be quite popular, featuring a display kitchen with an open-hearth pizza oven, visible from the bar area, and a variety of seating options. “There are stools for the ‘eat-at’ bar, free-standing tables, banquettes, and booths behind partitions that are popular with families,” says Idle. “People can find their comfort areas, depending on whether they want to be right in the middle of the action, or tucked away in more private settings.”

A proven benefit of display kitchens, Idle notes, is how they help diners and culinary staff connect. “They can be a hard sell at first, but they really lead to improved interaction,” he says. “Especially in clubs with more conservative, higher-average-age memberships, when you integrate the activity and create theater, the members become more patient and appreciative—and bartenders and chefs become the stars of the show.” All of the dining venues inside Lost Tree’s new clubhouse were redesigned for maximum flexibility that allows staff to better accommodate various-sized groups in comfortable private rooms, with retractable millwork and fabric wall panels providing the ability to create space for larger functions. A private Wine Room, added on the lower level, can be accessed by members from a lobby elevator and serviced from the main kitchen, which was designed to better accommodate simultaneous events, with a banquet line for the main dining rooms and an a la carte line for the Grille Room and outdoor patios.

And since the new clubhouse opened, both of those lines have been running full tilt, reports Lost Tree Chief Operating Officer Rick Bayliss Jr., who came from Oakland Hills Country Club in 2009 to help direct how Lost Tree would recapture its magic.

“It’s all worked out famously,” says Bayliss. “In the first season, we went from $2.2 million in food-and-beverage revenues to $3.5 million. With 70% of that coming from a la carte, we still have room to grow our banquet business.

“The Wine Room has been huge; in season, it gets used every night,” he adds. “Wine sales have tripled. Our pro shop, which was expanded and modernized, has seen a significant boost in sales.

“Probably the greatest thing has been the Grille Room and how it’s helped with casual dining and our bar business,” Bayliss says. “Overall, we can now offer the full range of dining experiences, inside and out, and that’s led to a seismic shift in the frequency of dining among members. Without any minimums, we now see many members come here three to four nights a week, because we’ve given them so many more reasons to say, ‘Why leave the community?’ ”